Naga leaders and citizens paid tribute and homage to the Naga civilians who were killed, tortured, raped and molested and forced to hard labour during the Operation Bluebird, 1987. 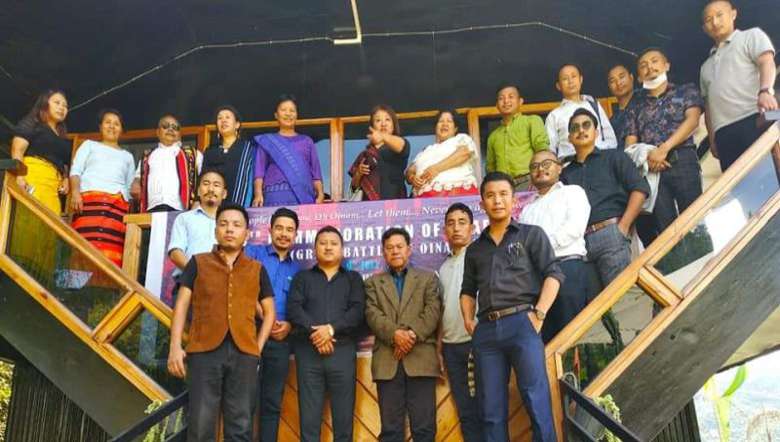 Naga leaders and citizens observed the 34th Onae Reh Dah on Friday, commemorating the Oinam's 1987 Operation Bluebird at PK Shedu Resort, Avafii, Kathikho Karong under Senapati district. "The gathering paid tribute and homage to the Naga civilians who were killed, tortured, raped and molested and forced to hard labour during the Operation Bluebird, 1987," according to Naga leaders participating the programme.

Rosemary Dziivichu, Co-Convener of Global Naga Forum (GNF) who is also Advisor of Naga Mothers’ Association (NMA), in her speech appealed the Naga leaders gathered in the event to pursue justice for the victims of Oinam incident with commitment, support and solidarity. She said, "Let the commemoration be a gathering of victory and not of defeat". Rose also stated that the case of Oinam poses serious legal questions to the Government of Manipur and the Government of India. She said that it was also a great challenge for the Nagas to put their minds and hearts together as family to bring home justice. Rose then mentioned that if people forget their history, it is difficult to tell their story to the younger generation. She expressed that the missing of documents from the court is a great weakness of the court. She then conveyed the support of Global Naga Forum for the Oinam case. She also conveyed the appeal from GNF that Nagas must continue to think beyond borders, consider each other as one, keep building fraternity, bonding amongst the Nagas and tell the Nagas’ story to the world.

Atokiho Sumi, Vice-President of Naga Students' Federation (NSF) in his speech expressed that “as young Nagas we long for the future without conflict and war.” He further stated that this historic event lies dear to the hearts of every Nagas. He cited that Naga Peoples Movement for human rights is a time tested organisation and has to continue as the guardian of human rights of the Nagas. He expressed that as Naga leaders, “we need to seek divine intervention and wisdom to unite Nagas.” He then said, “On this historic event, let us take a pledge and proclaim that we are free from any control and external forces that threaten our existence.”Solidarity messages were delivered by Kho John, president of the United Naga Council(UNC), Asha Wungnam, president of Naga Women’s Union, Wanglar Thiirtung, president of All Naga Manipur Students' Association Manipur (ANSAM) and Solomon Arow, president of Naga Peoples Organisation (NPO).

Joyson Mazamo, Convener of NPMHR (South), in his keynote address, urged the Government of India to come clean by “dispensing justice for all victims of Operation Bluebird; repealing Armed Forces Special Powers Act; scrapping the Protected Area Permit Regime; restoring peace, a peace that we want and not that is prescribed or imposed and dignity in Nagas' land.”

It may be mentioned that NPMHR filed writ petition in October 1987 to the Gauhati High Court, charging that the security forces had committed the following cognizable offences: murder, manslaughter, infliction of grievous injuries, rape and sexual harassment; arson, looting and theft; desecration of Church; wanton destruction of public and private properties; including school buildings; illegal evictions; illegal raids, seizures; illegal detentions and arrests and forced labour.

Since 1988, the people of Oinam Hill (Onaeme) had been observing July 9, as a ‘Day of Prayer’ abstaining from work and gradually adopted the name ‘Onae Reh Dah-(The Great Battle of Oinam)” in the year 2006 and commemorated 25thyear in 2012 at Oinam Hill Village.