MP RK Ranjan, who was sworn in as Minister of State (MoS), was given the charge of External Affairs and Education, making him the fourth MP from the state to get an Union cabinet berth. 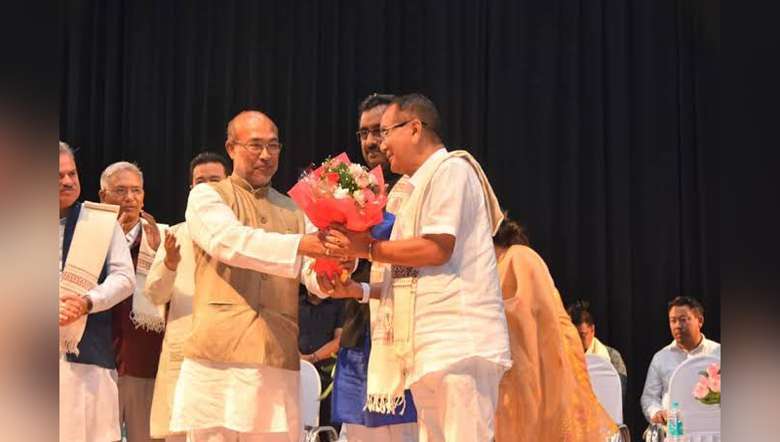 Lok Sabha MP RK Ranjan Singh became the fourth MP from Manipur to be inducted in the Union Council of Minister.

RK Ranjan, who was sworn in as Minister of State (MoS), was on Wednesday given the charge of External Affairs and Education, making him the fourth MP from the state to get an Union cabinet berth.

RK Jaichandra Singh was the first to be inducted into the Union Council of Ministers from Manipur during the time of Rajiv Gandhi between 1985 and 1988 as the Union Minister for Sports and Youth affairs, and later on as the Chemicals and Petrochemicals Minister.

The second was Outer Manipur Parliamentary Constituency MP, Prof Meijinlung Kamson of the Congress party, who served as a Union Minister of State for Home Affairs from 1995–96.

Veteran politician and former BJP Manipur president, Th Chaoba was the third from Manipur to be inducted into the Union Council of Ministers. Chaoba was appointed as MoS for Culture and Youth Affairs and Sports from October 13, 1999 to February 2, 2000 and MoS for Food Processing Industries, Ministry of Agriculture from May 27, 2000 to September 1, 2001.

RK Ranjan was elected from the Manipur Inner Parliamentary Constituency in the 17th Lok Sabha election, 2019.

After getting his Doctor of Philosophy, Department of Geography, Gauhati University, he started his service career as a Lecturer in Geography at Ideal Girls’ College, Government of Manipur in 1973 and served till 1984.

Dr Rajan also served as Director in-charge of the UGC Academic Staff College and College Development Director of Manipur University till his superannuation in the year 2012.

After retirement from active service, he joined electoral politics in the year 2013 as Bharatiya Janata Party member, Manipur Pradesh.

In 2014, he contested in the 16th Lok Sabha Election, from the Inner Manipur Parliamentary Constituency as BJP candidate but was defeated by a Congress candidate.