Pseudo Experts on the Forefront!

The removal of kabak of the two kanglashas at Kangla which was shown in the local TV channels indicates the utter lack of knowledge of the so-called experts even in Meitei tradition. 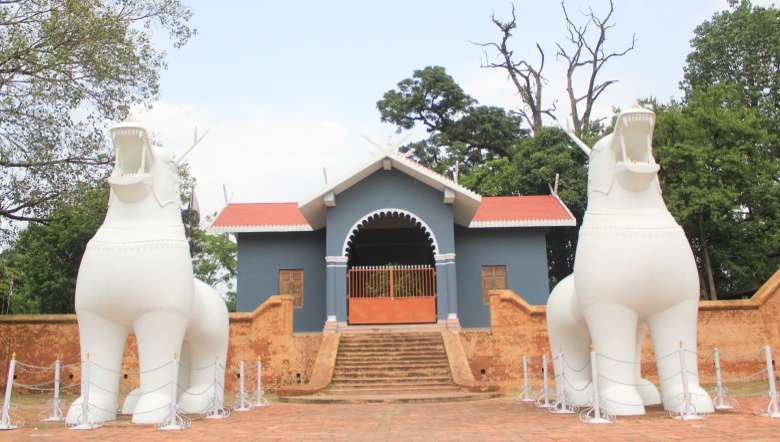 IT came as a shock when report of the removal of the Kabak (rods between the jaws) of the two kanglashas at Kangla was shown in the local TV channels. I immediately rang up a few members of the Kangla Board as to whether the Board had taken any decision to the removal of the kabak and the answer I got was in the negative. Under the Kangla Act, 2004 it is only the Kangla Board which can take decision on matters relating to Kangla. Before removal of the kabak, the matter should have been discussed thoroughly by the Kangla Board why it was put in place and why its removal is deemed necessary. And decisions of the so called Uttra Shanglen, Sanamahi Temple Board, etc are irrelevant on the matter. But discussion is never a forte of the government, despite the fact that it was claimed that the operation was carried out after consultation with experts. Who were these experts who were consulted and what are their expertise?

The two Kanglashas were first constructed by Chourajit in 1804 adapting from the Burmese mythical beast ‘chinthe’ which guard the entrance of pagodas. The one that was destroyed by the British in 1891 was constructed by Narasingh in 1844. There are photographs of the kanglashas constructed by Narasingh and the present replica which was constructed in 2007 was based on the photographs available in the British Museum. The conservation and restoration of archaeological sites is a highly technical matter and there are certain laid down norms for it. The purpose is to protect from further damage and restore it to a former state. The techniques available as per ICOMOS are - Restoration which is “returning of the existing fabric of a place to a known earlier state by removing accretions or by reassembling existing components without the introduction of new materials”; Reconstruction which is “returning a place to a known earlier state; distinguished from restoration by the introduction of new material into the fabric” with the aim “to preserve and reveal the aesthetic and historic value of the monument and is based on respect for original material and authentic documents”; Recreation/Renovation which is “speculative creation of a presumed earlier sate on the basis of surviving evidence from that place to other sites, and on deductions drawn from that evidence using new materials” and Relocation which involves the physical movement of the site or part of it to another location and is resorted when the original site would be heavily damaged or even eliminated and the best example of this is Abu Simbel temples which was moved to a location as the original site was going under water due to the construction of the Aswan dam.

Kanglasha was reinstalled following the principle of reconstruction with the available photographs as the template and as there was kabak in the original, in the replica also it was kept so that it reflects as truly as possible the original. The so called experts who advised the removal the kabak must be pseudo experts who do not know the principles which are accepted globally on conservation and restoration of heritage sites and monuments. These self styled experts are a doom for Manipur. In the 1950s a large number of fake puyas were brought out by one Thokachamba, who later on admitted to his mischief, including the puya which claims that Pamheiba is not the son of Charairongba. Wangam Somorjit is one of his articles has logically and rationally dismantled this puya based on historical records but unfortunately State Archives have procured a copy of this fake puya and kept in the records. The inability to assess the authenticity of puyas will make Manipur’s heritage in doubt when further studies were carried out by unbiased and independent scholars.

The worst aspect in the process of removing the kabak is the claim that kanglasha is Nongshaba. Nongshaba the primary God during the reign of Khagemba, ranking even higher than Pakhangba and Taibang Khaiba (Sanamahi), was made to be gatekeepers of the Sangai Yumpham. Such desecration of an important Deity! According to Meitei tradition, the seats of Nongshaba, Yumjao Lairembi and Pakhangba has to be installed on the left of the palace or else it is not a palace and hence even in Sylhet where Gambhir Singh ruled for sometime there are temples of these three deities which still stood even now and is a protected monument by the Bangladesh Government.

The removal of kabak indicates the utter lack of knowledge of the so called experts even in Meitei tradition. It seems they are just unaware of the purpose of the Kanglasha. Kanglasha which was originally called Nongsha (heavenly beast) and subsequently called kanglasha after 1891 bears certain resemblance to lion and therefore lions are called nongsha. Singapore is also named after lion as when an Indian prince arrived by ship at the seashore he spotted a lion racing away and called the land Singapur (land of Lion) which is now corrupted to Singapore. The belief then among the Meitei was that seeing or facing Nongsha is a bad omen just like seeing a deer or hearing it bark and keeping it at the gate ensures that anybody who enters the palace was ensured bad luck as he have to see the Nongsha and thus in any negotiations the King will come out the winner. That was the logic that even in the Old Secretariat there is small replica of nongsha at the gate, which many just do not see. Oja Tomba of Tera and Chingtam Luwang were earlier strongly proposing for removal of the kabak but when they were informed about the logic they did not further press for the same. Sane logical people they are.

Manipuri should be proud of their heritage and should not fortify it with fake ideas and myths. To have a script among the Tibeto Burmese whether it is derived from other scripts is a great achievement. Almost all existing scripts somehow or other is derived from the Mesopotamians. To claim Kangla as the Cradle of civilisation without supporting facts based on hearsay and false narratives will only hurt our heritage. We should be proud of our heritage, with warts and all, as then we were far superior to our neighbours. Thus even reconstruction/ restoration of kangla and other heritage sites the principle adopted worldwide must be followed. We love to say that anything ours is world class but we hardly maintain the international standards. The tendency to construct concrete civil structures on our heritage sites must stop as it not only desecrates the site but also gives a wrong picture of our heritage. Who gave the term “Uttra Shanglen” as it was never used earlier and what it means is also unclear. Some self style maichous are literally misdirecting the study of our per-vaishanvite tradition by trying to show that it is far superior to the later traditions. No tradition is inferior or superior and only time will decide whether it survives or disappears. Even the cannibals of Papua New Guinea feel that the world revolves around them. Every culture believes that the world revolves around them and each has its own beauty and distinctiveness, thereby enrich the human heritage. Now with scientific tools and studies, such mischievous incorporation of new facets will be discovered and only make our tradition a target of ridicule and the so called scholars an object of ridicule. An example is the claim that our letters blossom from the human body. But pray from which century did the term ‘kok’ replaced ‘lu’? Such short sighted manipulation will render our beautiful heritage an object of derision!

The one small act of removing the kabak from the kanglasha while not only pointing to the utter lack of knowledge and understanding of the so call experts, it may be the final nail on the coffin to ensure that Kangla never figures in the UNESCO heritage sites. Even now, with the construction of the mammoth Pakhangba temple there are issues to submit a proposal, though some proponents of removing kabak insists that Kangla deserve to be included in the UNESCO heritage sites! The Manipuri saying “Angangna maiba saba mang thalli” need to be recalled and such pseudo experts will damage our heritage irreconcilably. What is the intent of the Government in doing so even bypassing the Kangla Board? Rationality and logic have been thrown to the winds in governance, as we see in the management of the COVID pandemic, and nothing better is expected.