Manipur in the global drug map: Golden Circle in the making

A representation to UN, South Asia, New Delhi in relation to the observance of World Drug Day/IDADAAIT 2021. 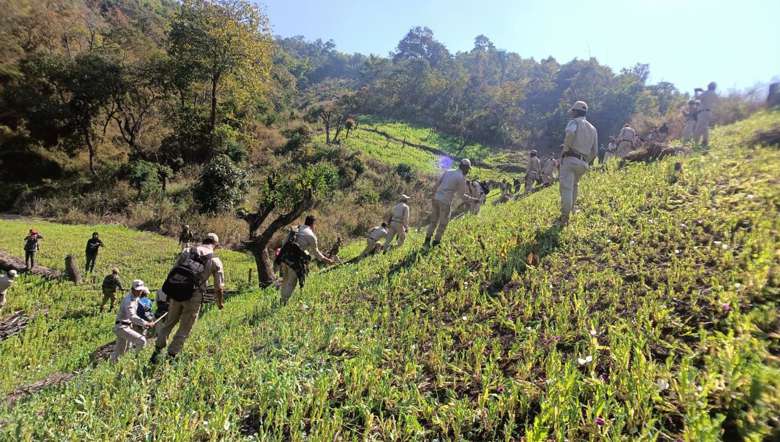 (The following representation was sent to the Deputy Representative, United Nations on Drugs and Crime, Regional Office for South Asia, New Delhi, India by USER Manipur on the occasion of International Day Against Drug Abuse and Illicit Trafficking, June 26 2021)

It’s the time of the year that reminds us of the global fight against the menace of drugs. There may be various interpretations over the observation of ‘International Day Against Drug Abuse and Illicit Trafficking’ by governments, civil stakeholders and the general populace but June 26 gains significance with each passing year. Users’ Society for Effective Response (USER), Manipur as one of the oldest body of drug users in NE India has been continuously striving to act as a catalyst in bringing about an effective response towards drug menace and we feel that there shall be a change in an overall perspective towards drug use. The world at large has accepted the fact that drug use is not an individual or moral problem but a by-product of a system that affects the vulnerable groups and rather shall be address through socio-political-economy and public health aspects. We understand that the term ‘against drug abuse’ was incorporated by the single convention on narcotics drugs 1961 and convention on psychotropic substances 1971 considering the views towards drugs use of the time.  However, now we are in an era of evidence based scientific approaches that discard the earlier notion to viewing drug users/drug victims negatively and it’s high time to change the title of the observance in order to bring inclusiveness in the global drug response.

Taking an opportunity of this momentous day, USER Manipur would like to draw your kind attention towards a grave concern that may be consequential to the global drug map.  Manipur is a small state in North Eastern India bordering Myanmar (Saigang Region to East and Chin State to South) having a total area of 22,327 sq kms inhabited by 3 major ethnic communities including 29 native tribes. The state has been reeling under political and armed conflict for more than five decades resulting in social unrest and economic instability. Behind the shadow of this grim scenario, the state has also been a infamous transit route of drug trafficking originating from the erstwhile Golden Triangle and coupled with the socio-economic factors of the region, the state has slowly evolved into a fertile grounds for drug use and large scale drug trafficking. To make the matter worse, a phenomenon of poppy cultivation has taken root since the last decade that recently transcend into local production of opioid derivatives such as heroin and brown sugar in the state. Clandestine drug manufacturing units have sprung up in the state. Many of which were busted by the law enforcing agencies and in October 30, 2020, a brown sugar manufacturing laboratory was raided by Manipur police in which 435 kgs of drugs were seized. Judging by easy availability of drugs in recent years, such manufacturing unit are just tip of the iceberg.  Street price of heroin locally known as Nos. 4 has drastically came down to nearly 80% than it used to be a decade back. Lack of quality in the locally available drugs has led to steep increase in cases of overdose that often prove fatal.

A nightmarish situation is slowly gripping the state with the government having no roadmap to systematically root out the looming opioid crises that is unfolding unprecedentedly.

According to media reports, a total of 2,241 acres of poppy cultivation were destroyed by Narcotics and Affairs of Borders (NAB) in the crop year of 2018-19 while 1,420 acres of poppy cultivation were reportedly destroyed in 2020-21. However, it is estimated that the figure is not even one third of the poppy plantations that lies in accessible area let alone that are grown in remote areas. Further, there are no government records on the magnitude of the prevailing poppy cultivation in the state but independent reports points out that rampant poppy cultivation as cash crop are being done in almost all the hill districts of the state and even some hill ranges of valley districts are also reportedly affected by it.

Lack lustre response of the government is evident as not even a single case has been registered in connection with poppy growing neither there has been reports of booking land owners. There are stringent laws of India under NDPS Act 1985 (Section 46/47) to curb such illegal practices but the same has not been enforced in the state. This has seemingly given an impetus to the poppy growers to continue with their illegal practice. Apart from this, there seems to be an abundant and free flow of ingredients, fertilizers and chemicals used in the poppy cultivations whereas there is always lack of fertilizers for the farming community of the state every year. This poses a question about illegal procurement and supply of huge quantity of fertilizers and chemicals to the poppy growers that may not be possible without the knowledge of the state machineries.

There are reports that illegal migrants from Myanmar and Bangladesh are reportedly engaged in poppy cultivation leading to a surge in influx of migrants in the state. Apparently there is a strong network of anonymous cartels that oversees the entire operation, right from engaging growers, manufacturing and to trafficking the entire finish product.  High profile drug trafficking cases are usually mired in controversies and alleged kingpins often evade justice due to their influence and power. The situation has come to such a pass that even an elected legislature of the state has openly admitted of having knowledge of lawmakers involving in high profile drug trade.

The decades long drug issue in the state of Manipur has taken a catastrophic turn since the last two decades when sporadic poppy plantations first emerged in the state in mid 2000s that grew exponentially overtime. Now it is not only threatening the state of Manipur and its neighbouring states but may slowly emerge as the second drug producing hotspot in Southern Asia next to Golden Crescent. It is high time, the UN take note of the gravity of the situation in order to prevent another drug crisis in the region.