People should get early vaccination as it will prevent severe effects from the virus infection, Sekmai MLA Heikham Dingo said. 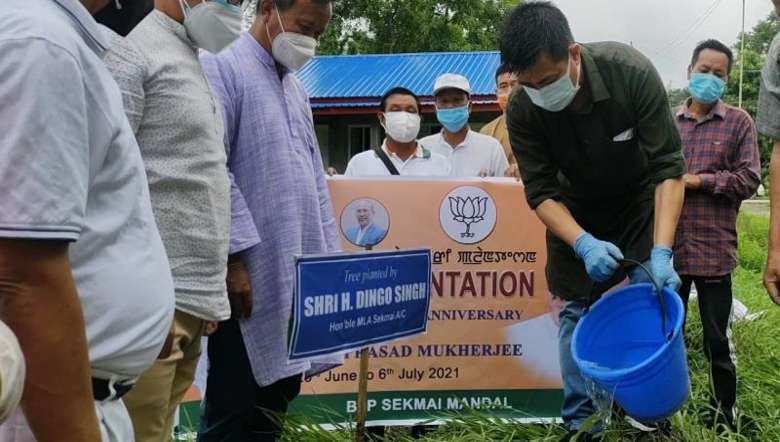 Sekmai MLA Heikham Dingo on Wednesday appealed to the people not to spread false rumours concerning COVID-19 vaccination while announcing that early vaccination will prevent infection.

He was speaking during a tree sapling plantation programme held at the campus of Sardar Patel High School in connection with the celebration of ‘balidan diwas’ and birth anniversary of Shyama Prasad Mukherjee on Wednesday.

Dingo who is also co-convenor of Joint Committee of COVID-19, Sekmai said medical experts reported that the upcoming COVID-19 third wave would be more communicable than the second wave.

People should get early vaccination as it will prevent severe effects from the virus infection, he said. Some people are spreading rumours to avoid vaccination, he further said, adding everyone should get vaccinated early. He appealed to all not to follow the rumours.

He said mobile RAT testing is being conducted in the assembly constituency and will be continuing for its entire population.

Dingo said mobile Covid vaccination will be launched at Kanglatongbi Hindi Higher Secondary School on June 25 and will be continuing for other villages of Sekmai assembly constituency as well.

As a part of the tree plantation programme, about 400 tree saplings were planted at the school campus. Floral tributes were offered to Shyama Prasad Murkherjee.

Dingo also said the planting of trees will leave a message for the future generation to save the environment.

The programme was attended by Chief Minister N Biren Singh, Works Minister Th Biswajit and other members of state BJP.