The cumulative number of COVID-19 confirmed cases in Manipur reached 64,418, while the death toll rose to 1055. 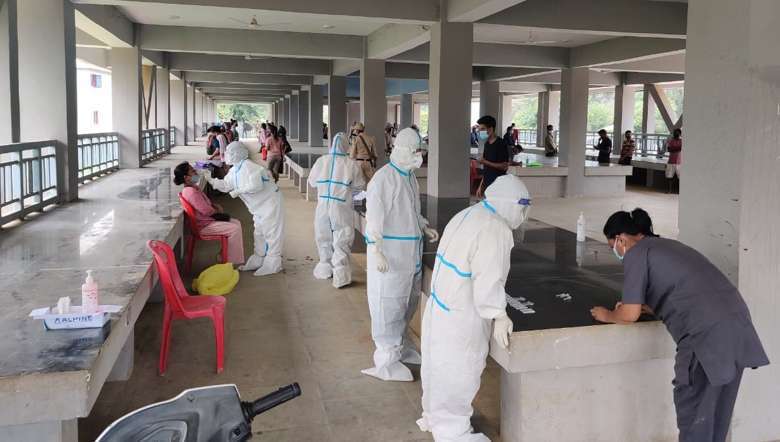 Manipur's daily COVID-19 positive tally dropped to 353 in last 24 hours, while the daily death toll remained below 10 at eight. On Sunday, the state reported 527 daily positive cases and eight fatalities.

However, it may be pointed out that the total number of COVID-19 test results received on Monday was only 2,272, as per the latest update by the state health department.

The cumulative number of COVID-19 confirmed cases reached 64,418, while the death toll rose to 1055.

Of the new COVID-19 positive cases, 98 patients hailed from Imphal West, 88 from Imphal East, 55 from Bishnupur, 45 from Kakching, 32 from Thoubal, 13 from Churachandpur, 10 from Tamenglong, nine from Ukhrul, two from Chandel and one from Noney.

Six districts in the state reported no new positive cases on Monday. They are Jiribam, Kamjong, Kangpokpi, Pherzawl, Senapati and Tengnoupal, according to the state level COVID-19 Deaths Audit Committee report.

Of the daily death toll, three victims belonged to Bishnupur, one each were from Imphal East, Imphal West, Kakching, Senapati and Thoubal.

The state's COVID-19 recovery rate improved to 83.92 per cent on Monday from 83.36 per cent on Sunday. In all, 54065 COVID-19 patients across the state have recovered as 660 more patients reported recovered. With it, the cumulative number of active cases eased to 9298 from 9613 on Sunday as per the release from the COVID-19 Common Control Room.

Meanwhile, as of Monday, as many as 494104 people in the state have been vaccinated with Covid vaccine.