Manipur Chief Minister N Biren Singh said that patients under home isolation will be provided additional medicines useful in treatment of the variant and also 20 triple layer masks each, hand sanitizers with extra medicines from Friday. 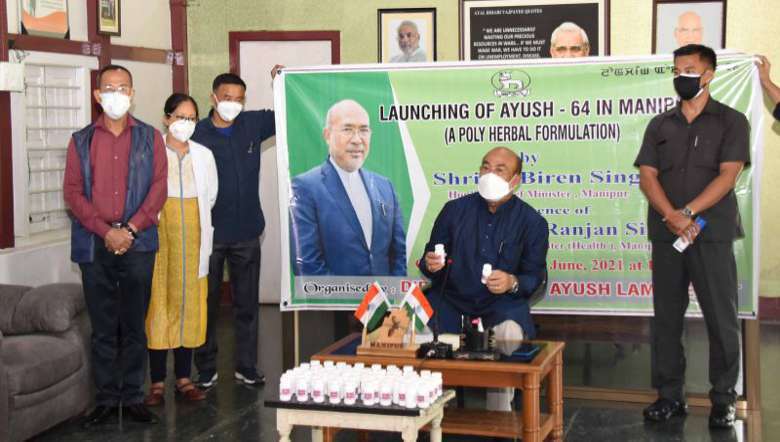 Manipur Chief Minister N Biren Singh on Friday informed that the highly transmissible Delta Variant of COVID-19 has been found in 18 samples sent from the state for testing.

CM Biren said that 20 samples were sent to Hyderabad from Manipur for testing, of which 18 were found positive for the Delta Variant. More samples are being tested, the chief minister said.

The chief minister made the announcement at the chief minister’s secretariat on Friday while launching AYUSH 64 (tablets). Biren said the use of AYUSH 64 has been approved by the Ministry of AYUSH for use by adults (above (18 years of age) in treatment of COVID-19.

The chief minister also said the AYUSH-64 tablet which is approved after proper clinical trials would be useful in treating asymptomatic, mild and moderate COVID-19 patients as it is purely organic and will not have any side effects.

Mentioning that the said variant had been the major cause of rapid spread, he said that patients under home isolation would be provided additional medicines useful in treatment of the variant and also 20 triple layer masks each, hand sanitizers with extra medicines from Friday.

The chief minister appealed to the public to come up with constructive criticism and encourage the work of health and frontline workers instead of simply pointing out mistakes and taking up negative propaganda at such a critical juncture during the pandemic.

Maintaining that saving precious lives of the people is the utmost priority of the government, he further urged the people not to believe in misleading information regarding the pandemic and to get vaccinated at the earliest.

Biren also urged the public to be more careful and follow Covid Appropriate Behaviours and SOPs issued by the government from time to time to prevent infection from the new variant.

Stressing on the need for more responsibility on the part of the public, the chief minister also appealed to the people to not go to public spaces until he or she is vaccinated. Adding that the state government had been taking up all the necessary measures to curb the spread of the pandemic, he also sought the support of all stakeholders in its fight against it.

It may be mentioned that the union minister of state for AYUSH (Independent Charge) Kiren Rijiju had earlier launched the AYUSH-64 on May 7 this year for nationwide distribution campaign for benefit of the vast majority of out-of-hospital COVID-19 patients.

The Ministry of AYUSH in collaboration with Council of Scientific and Industrial Research (CSIR) had also recently completed a robust Multi Centre Clinical Trial to evaluate the safety and efficacy of AYUSH-64 in the management of mild to moderate COVID-19 patients. It was found that AYUSH-64 reduces the duration for clinical recovery in terms of diseases, symptoms and severity.

Other council of ministers, principal secretary health V Vumlunmang and director AYUSH Dr A Guneshwor Sharma
also attended the programme among others.

Meanwhile, an official of Integrated Disease Surveillance Programme told the Imphal Free Press that it is a necessity for every individual to follow Covid appropriate behaviour, and all should also get vaccinated to prevent themselves from being infected with the new variant and to contain the spread of the virus.