The accused has been identified as Md Tarique Ajij, 30, from Sangaiyumpham Part- I Thoubal district, and currently he is posted as a rifleman at 8 MR, Leikul of Chandel district. 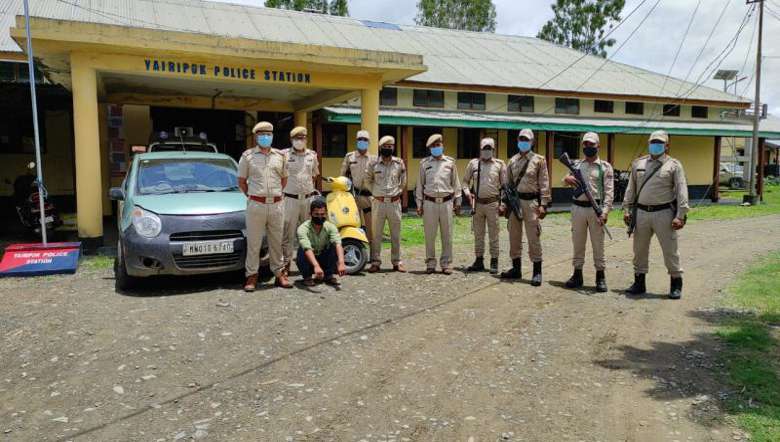 A Manipur Police rifleman was arrested on the charge of stealing a Vespa scooter by Thoubal district Police on Tuesday.

A statement by the police stated that the accused has been identified as Md Tarique Ajij, 30, from Sangaiyumpham Part- I Thoubal district, and currently he is posted as a rifleman at 8 MR, Leikul of Chandel district.

An accomplice in the theft Sangomsumbam Nawaz Khan alias Iboi ,23 , son of Sm Isamat of Urup Salanpham was absconding but arrested later by a team of Yairipok Police Station led by SI Y Shankardas Mangang from his residence at 9:10 pm on Wednesday

The police were notified of the theft after an individual named Md Farid Shah from Yairipok Bamon Leikai submitted a written complaint in regard to the theft of his private vehicle to the OC of Yairipok police station on June 4.

The written complaint stated that Md Farid had kept his yellow-coloured Vespa scooter (MN06SA/8378) locked in front of Mosque located at Yairipok Bazaar, and miscreants had lifted the vehicle from the spot on June 4. As soon as the complaint was received, a case was taken up at Yairipok Police Station and an inquiry was initiated to locate the stolen vehicle. After checking out the footage from the CCTVs installed around the area, it was revealed that an A-Star car bearing registration number MN01G/6740 was also involved in the theft, and the police immediately started a thorough hunt for the car.

The car was found to be registered in the name of an individual named Naoroibam Romeo Singh son of (Late) Nimai Singh of Khurai Konsam Leikai; however, it was confirmed that Romeo had sold the car to a Muslim in 2019.

Later on Tuesday, upon receiving reports that the A-Star car was seen at Moreh Bazaar, a police trio of SI Y, Shankardas Mangang, SI W Deepakchandra Singh, and ASI S Maneshwor Singh immediately proceeded towards Moreh. When the police team was approaching Lokchao Bridge, the A-Star car was seen heading towards Imphal, so the team took a U-turn and started to chase the car.

The car was finally intercepted at the gate of Tengnoupal police station, and subsequent inquiry revealed that the driver was Md Tarique Ajij who further admitted that he had committed the theft along with Md Nawaz, and that the stolen Vespa scooter was kept hidden at his residence at Sangaiyumpham.

Md Tarique was arrested on the spot and the stolen vehicle was also recovered from his residence. The arrested person along with the seized vehicles was brought to Yairipok Police Station for further necessary legal actions, the police added.