The Manipur chief minister expressed hope that ICAR would explore further on the rich natural resources available for the benefit of the farmers. 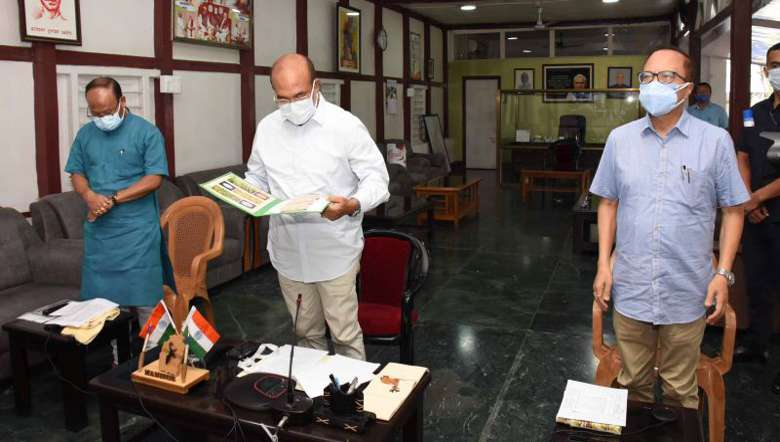 Manipur Chief Minister N Biren Singh on Tuesday said that the government continues to address the key challenges of agriculture in the state and the Northeast region, including low productivity, small holdings, under utilisation of irrigation potential and inadequate infrastructure along the supply chain.

He was speaking at the inaugural session of a national virtual workshop organized by ICAR NEH Region, Manipur on the topic, ‘Potential Crops of North East India: Prospects and Challenges’ as the chief guest. Agriculture Minister O Lukhoi Singh and commissioner (Agriculture) M Joy Singh were also seated with the chief minister as guests of honour.

N Biren Singh said that agriculture continues to be the mainstay for the majority of the population in Manipur and the Northeast region, which is endowed with diverse agro-climatic conditions with varied soil types and abundant rainfall. As a result, there is huge potential for promising agricultural and horticultural produce and value-added products that can be marketed within the country and abroad, he added.

Mentioning that there is a changing demand for not only more quantity, but food with quality, nutrition and taste, he said that the answer to these demands lies in crop diversification and use of new technology. Towards this end, he said, ICAR Manipur Centre, which was established in 1975, has been rendering valuable services to the state. It had been providing regular advisories, weather data and forecasts for the benefit of the farmers, he further said, adding that ICAR had also supported in formulation of state action plans and strategies during Covid pandemics, floods and droughts in collaboration with various state government departments.

Maintaining that the Northeast region has many more potential crops, horticultural and vegetable plants, which need to be studied and commercialised as high value organic and nutritious food, he expressed hope that ICAR would explore further on the rich natural resources available for the benefit of the farmers.

Speaking at the occasion, O Lukhoi Singh said that the state Agriculture department is working along with ICAR with its full scientific and technical support. In the state government’s strategy for self-sustained agriculture through double cropping, production of 9 lakh MT of rice is being targeted against the present production of 5.10 lakh MT by increasing the seed replacement rate from the existing 20 per cent to 60 per cent, it stated. The seed distribution programme is also a part of the strategy, he added.With new varieties of rice coming up from ICAR, he also expressed hope that the target production of rice would be achieved within five years in the State. O Lukhoi Singh also urged the Central Government to explore the possibilities of increasing manpower in ICAR Manipur Centre.

He expressed happiness that ICAR had been collaborating with the State Agriculture department in proper distribution of the high yielding variety of rice seeds particularly RC Maniphou-13 which had the highest demand by the farmers in the state.

He also expressed confidence that the workshop would make meaningful recommendations to transform the agriculture sector for the welfare of Manipur, in particular, and for the region in general. The State Agriculture department would definitely like to make use of the outcome of the workshop, he added.

They also virtually distributed agricultural inputs to about 1000 farmers. These include 10 tonnes of certified seeds of RC Maniphou-13 provided by the State Agriculture department.