Is Manipur still a Kingdom?

For Sanajaoba Leishemba, he was never recognised by the President of India as the Maharaja, as he was born after the abolition of the privy-purse and privileges. 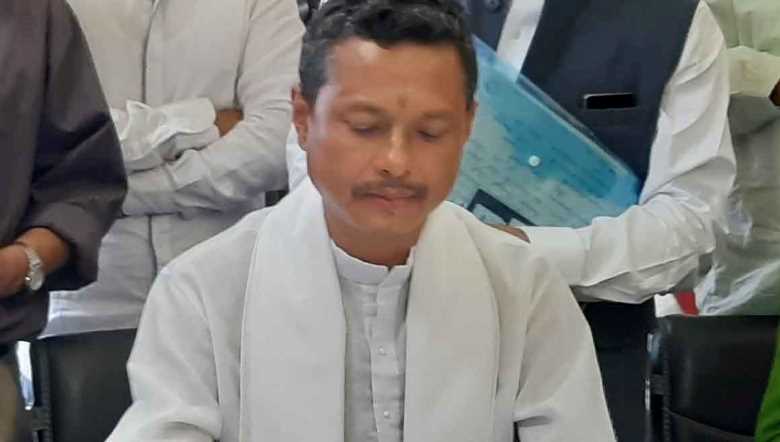 On seeing the title, readers may think that the author has lost his moorings as after merger of Manipur to the Union of India on 15th October, 1950 it is a part of the sovereign, socialist democratic republic. However, when one sees the certificate issued to the winner of the election for the recent Rajya Sabha seat, one will have to trust that even the ECI, which is a Constitutional body (Art. 324) recognised that there is still a Maharaja in Manipur; and if so is not there justification to claim that Manipur is still a kingdom? The Certificate reads “Maharaja Sanajaoba Leishemba” in the space for the name of the winning candidate.

Under Article 18 of the Indian Constitution, the state shall not confer any title not being a military or academic distinction and even the National Awards like Bharat Ratna, Padma Awards, etc are awards and not titles; therefore can’t be use either as a prefix or suffix to the name. Till the 26th Constitutional Amendment in 1971 which came into effect from 28.12.1971 omitting Art 291 relating to Privy Purse and 362 relating to Privileges given to Rulers, amending Art 366 in the definition of Rulers and inserting Art. 363A ceasing the recognition granted to Indian State’s Rulers and abolition of Privy Purse, those rulers who were recognised as Maharaja by the President of India can use the title. But after the 26th Constitutional Amendment, there is no Maharaja and the maximum one can write is Ex-Maharaja. Okendrajit was recognised as Maharaja by the President of India and he can use the title of Maharaja but from 28th December, 1971 he can only use Ex-Maharaja. Sanajaoba Leishemba was never recognised as Maharaja by the President and the use of the title Maharaja by him is technically not legal.

As the Returning Officer has no power to change any entry filed by the candidates, the affidavit filed by the candidates were accessed and yes in the affidavit, he has given the full name as Maharaja Sanajaoba Leishemba and even his signature includes Maharaja, which is a title as indicated above and the practice is while writing full name titles are not included. While scrolling through the affidavit, it was indicated that he owns 1 acre of land at Palace Compound (= 43560 sq ft) but what was shocking is that its value was indicated as Rs. 3,00,000/- and the building of the Palace covering 4,000 sq ft was assessed at Rs. 50,000/- . The question is who had advised him to put the value of the land and the building? As per Government orders, the Minimum Guidance Value in Palace Compound area which are not adjacent to the main roads is Rs. 100/- per sq ft and hence for the total area, it should come at Rs. 43,56,000/-. The value as indicated in the affidavit comes to Rs. 6.89 per sq ft, which is dismally too low and this will perhaps be applicable only in the hills, where people do not reside. The market rate in the area ranges from Rs. 2,000/- to Rs. 3,000/- per sq ft and hence the value of the land should range between Rs. 8,71,20,000/- to Rs. 13,06,80,000/-. If the government desires to acquire the land in the future, will the owner agree to accept it at Rs. 3,50,000 plus appreciation?

There are many who oppose his nomination and election as Rajya Sabha Member but as a citizen of India he has every right to decide what is considered best for him. Forcing him will be a violation of his basic rights to free choice; which is against the principle of natural justice and the Constitution of India. He was not coronated in the true sense as in Manipur the coronation was to be held over the “Kangla men”, and those kings who were not coronated there, was not included in Ningthourol Lambuba. In the true sense, as per the extent rule Okendrajit can be referred after 1971 while he was alive, the former or ex Maharaja of Manipur as he was recognised by the President of India. For Sanajaoba Leishemba, he was never recognised by the President of India as the Maharaja, as he was born after the abolition of the privy-purse and privileges. The recognition of him as a king was only through the customary system, as it needs a king and he was correctly referred to as the titular king.

There are also demands that he should relinquish the titular kingship but as per the tradition of Manipur, the eldest son becomes the king and the change is either through natural death of the king, or defeat of the king though due to an understanding, Bhagyachandra and Gourshyam ruled for five years each till the latter died and the former continued as king. There was no instance of the king due to public demand relinquish the throne in favour of any other or the public chose another person. Hence, the demand, which have emotional import was not supported by tradition. If the public desires, as there is no legal power attached to the kingship, except for the customary practices, they can just disregard him and decide on somebody whom they like. The only problem is that the new person will face an uphill task as to his acceptability and that may lead to a fractured society with many claimants. A highly unsuitable proposition and those who are clamouring for a change will find it hard to accept somebody who follows Hinduism. There are various undercurrents towards this end as most of the readers are aware, though it was never articulated fully. Those who oppose his continuance as the titular king may have to accept him irrespective of whether he is an MP or not; despite their anger as there are limited alternatives.

The question is whether the use of a title in the affidavit and the certificate will vitiate his election, and I hope not as the risk he had taken is grave and as he had come out successful; let him enjoy the fruit of the risk he had taken. There is however, no trust in what he says after election that his priority is the state and the people as every politician worth their salt utters the same thing while doing on the contrary. Remember Tolstoys’s “the Imp and the Peasan’st Bread”. Nobody had ever said that he is contesting for his own good, but see the lucre they had amassed during the short time they are in power? The acceptance of the use of the title of Maharaja by the ECI represented by the RO is a conundrum in independent India of which Manipur is a part and can we claim that Manipur is still a kingdom!