A villager was allegedly shot dead by an Army Major at Chalwa village in Kangpokpi district on the night of June 4. Tension erupted over the killing in Twilang area and several organisations condemned the incident. 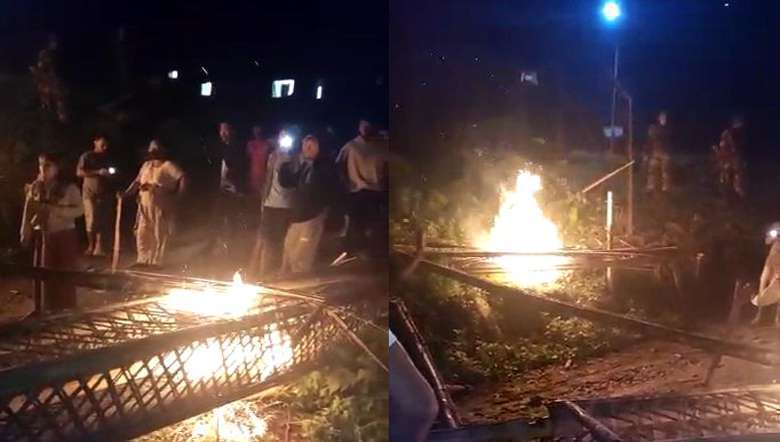 Amid strong public condemnation and tension that erupted over the killing of a villager at Chalwa village in Kangpokpi district of Manipur on the night of June 4, the civil bodies, the Assam Rifles and the state government on Saturday signed an agreement which announced a police probe into the incident.

The agreement also stated that the present company of 44 AR Banglabung outpost (Gelnel village) will be removed or replaced by the same company as in Kangpokpi district headquarter at the earliest after approval from the Army Headquarter in New Delhi.

A fully functional armed Police Station in the area with minimum of 40 in strength will be set up at the earliest, and the Assam Rifles will compensate for the loss of life to the deceased family an amount Rs 10,00,000 on humanitarian grounds of which Rs 1,00,000 will be given on Saturday, the agreement stated.

The incident took place at Chalwa in Kangpokpi district of Manipur. An Army Major, post Commander of 44 Assam Rifles stationed at Gelnel village, allegedly shot dead a villager of Chalwa on the night of June 4.

Following the alleged killing, an enraged mob, including men and women of Twilang area, stormed the 44 AR outpost at Gelnel village (Banglabung) and torched one four-wheeler (Gypsy) and one truck (407 Tata) of the Assam Rifles. In the morning, it was found that two AK rifles of the Assam Rifles inside the Gypsy were also burnt down during the arson.

In connection with the incident, the accused Major Alok Sathe was briefly detained by the Kangpokpi Police Station.

Speaking to the media, deceased Mangboilal’s father Sehlam Lhouvum alleged that Major Alok Sathe with his jawan rifleman Amar and two others in civil clothes and in a civil vehicle with service weapons carried out an operation at Chalwa village on June 4 at around 9 pm.

Sehlam alleged that his son Mangboilal Lhouvum was first made to drink alcohol allegedly by the AR team which had detained him. He was brought onto the roadside and fired upon allegedly by Major Alok Sathe. He was carried to PHC T Waichong village but the doctor referred him to the Kangpokpi District Hospital since no proper medical facility was available at the PHC for further treatment.

However, despite all efforts on the part of the medical department, he succumbed to his injuries before reaching Kangpokpi near Chawangkining, the father added.

Sehlam further alleged that Major Alok Sathe roamed freely with his service weapon in civil clothes and collected information for a month.

Mangboilal Lhouvum is survived by his wife Neikhochong Lhouvum and four children. He was the sole bread earner of the family by working as a helper of one truck (Shaktiman) driver.

Speaking to the media in Kangpokpi, the deceased’s wife Neikhochong Lhouvum said, “We went for work and returned in the afternoon and after having food, he went out to visit their neighbour’s house… after a gunshot was heard, I was informed that my husband was lying injured on the road. I rushed to the spot only to find him grievously wounded and in a critical condition”.

The young mother also said that her husband has no connection with any militant outfit, and pleaded for speedy justice.

On learning about the incident, civil bodies of Kangpokpi district under the aegis of Kuki Inpi immediately rushed to the spot and took stock of the situation. However, tension erupted once again after the civil police allegedly refused to arrest the Major who allegedly shot down Mangboilal Lhouvum.

General secretary, Kuki Inpi Kangpokpi district Thangminlen Kipgen said that the AR high authority claimed the Major cannot be arrested because there is AFSPA and he is a Central government employee apart from being an Army officer. He said an army officer in civil clothes, coming out on a mission in a civil vehicle, appeared to the people to be a premeditated act and “we firmly believe that the life attempt of Mangboilal Lhouvum is also premeditated.”

“Major Alok shot me” was the last words of deceased Mangboilal Lhouvum before he succumbed to his injuries, Kipgen said, adding that after the firing, the victim was alive for three-four hours but unfortunately passed away.

“It was the deceased’s personal testimony virtually recorded that he was shot by Major Alok of 44 AR Gelnel Banglabung outpost,” he added.

In a video footage that went viral on social media platforms, Mangboilal was quoted as saying he was shot by Banglabung outpost Commander Major Alok.

After a heated confrontation among the security forces and the civil voluntary organisations, Kangpokpi police led by additional SP (Ops) and OC Chalwa Police Station took the AR major into their custody and brought him down to Kangpokpi Police Station.

Meanwhile, condemnation poured in from various quarters over the alleged killing.

The Kuki Inpi Manipur also condemned the killing and shared the pain of the bereaved family. KIM also urged the authority concerned to take appropriate action against the culprit and deliver justice without delay to the victim’s family.

Thadou Students’ Association Sadar Hills expressed strong resentment and condemnation and conveyed its readiness to support any movement for delivering justice to the victim’s family. The local bodies of Kangpokpi town also expressed strong condemnation over the alleged killing of Mangboilal Lhouvum and demanded befitting action upon the culprit.