MPCC leaders called on Governor Najma Hetpulla on Friday and submitted a memorandum, demanding universal free vaccination of every citizen in the country. 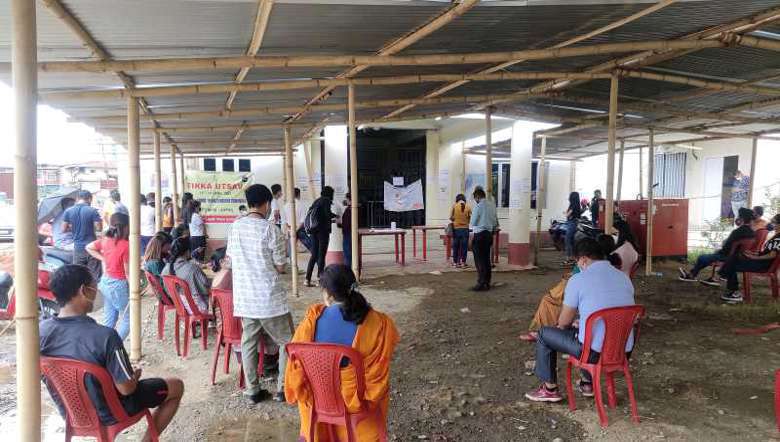 In a video release issued by MPCC after meeting the governor, Ibobi questioned the rationale behind the delay in providing the 2nd dose in the state and making the recipients wait for three months while the Prime Minister of India took the 2nd dose within a gap of one month.

Ibobi questioned the purpose of conducting the Covid tests if there were no vaccines available, while asserting that the vaccination should be given the top priority to save the lives from the severity of Covid infections and deaths.

The Congress party feels that even the public may become apprehensive concerning the reasons for the delay of 2nd dose in the state, Ibodi said and questioned whether there are no vaccines in stock for the state.

Ibobi further said the congress party has no intention of taking political mileage and criticising the government at such trying times during the pandemic. Irrespective of ruling party or opposition, the Congress party feels that there should be a collective effort to fight the pandemic, he added.

Meanwhile, the memorandum submitted, sought the attention of the governor to ensure free and total vaccination, with two doses on time, of all the people in Manipur. The memorandum also mentioned that COVID-19 has caused unprecedented devastation and immeasurable pain to nearly every Indian family.

The Modi government has completely abdicated its duty of fighting the pandemic and abandoning the people, leaving them to fend for themselves, it stated.

The memorandum stated that Centre is guilty of criminal mismanagement of COVID-19. Vaccination is the only protection in the midst of the raging pandemic but the Modi government went on to place its first order of vaccines only in January 2021, when countries started placing purchase orders for vaccines from May 2020.

As per sources, the Government of India has administered 21.31 crore vaccine doses till 31 May, 2021. But, only 4.45 crore Indians have reportedly received both the doses of vaccine, which is only 3.17 per cent of India’s population.

“In the last 134 days, the average pace of vaccination is about 16 lakh vaccine doses per day. At such a pace, it will take over three years for India to vaccinate our adult population. In such a case, the Modi government needs to answer as to how the citizens of the country will be saved from the third wave of COVID-19,” it stated.

The need of the hour is that the BJP government should procure the vaccines, supply them for free to the states and private hospitals for the vaccination of the people of India, the memorandum stated. The entire adult population of above 18 years should be vaccinated by December 31, and the only solution is to vaccinate at least one crore people a day and not at the current average of 16 lakh people a day, it added.