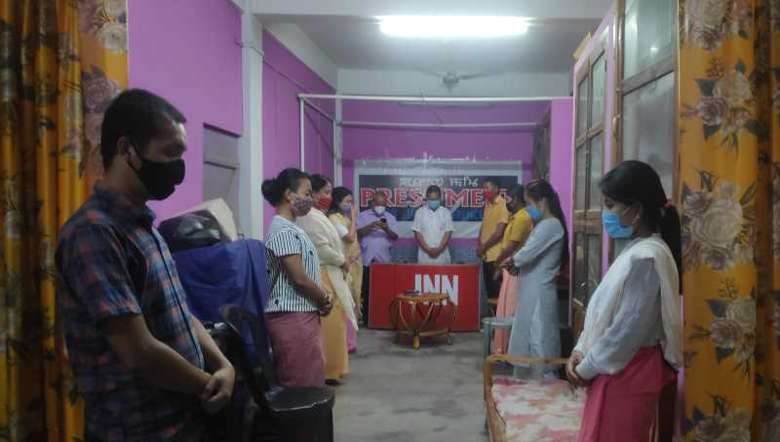 JNN staff and committee members observed a one-minute silence in honour of the deceased (Photo: JNN).

A condolence meeting in homage to news anchor, Jiri News Network (JNN) Y Surmila Devi who breathed her last at RIMS Hospital was held at the conference hall of JNN, Babupara on Tuesday.

During the meeting, staff and committee members of JNN observed a one-minute silence in honour of the deceased.

Speaking on the occasion, president of JNN committee M Brojen Singh said that the loss of Y Surmila is not a loss for JNN alone but for the entire state. The JNN team shares the grief and sorrow of the bereaved family, he said.

Meanwhile, the school management committee, teaching and non-teaching staff of RK Sanatombi Vidyalaya, Jiribam also organised a condolence ceremony in honour of the late Y Surmila Devi who was also a teacher of Manipuri and Music at the school.

Principal of the school S Maniton Singh, in his condolence message, stated that Y Surmila was not only an able teacher but also a gentle, kind-hearted, and a generous individual.

“The school mourns the loss of the teacher, and our hearts go out to the bereaved family in this time of sorrow,” he added.