The bird, which was unable to take flight, was found by one Ningthoujam Nabachandra at Khordak Mayai Leikai near his fish farm, 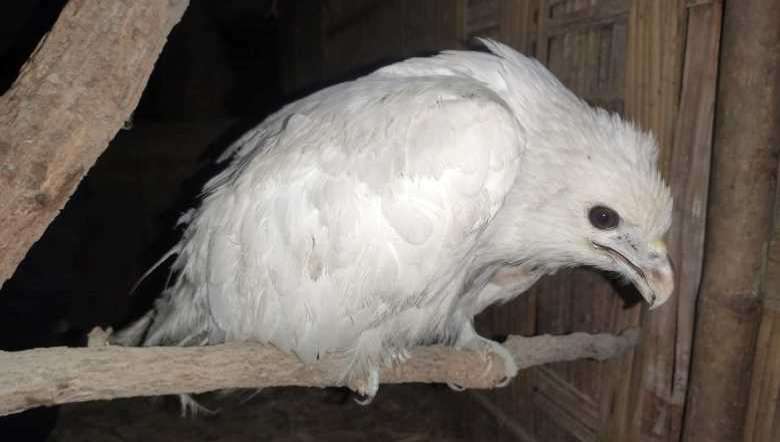 A rare white albino hawk, which was never sighted in Manipur before, was found from near a fish farm. The People for Animals (PFA) Manipur rescued the bird which was found with damaged feathers and in a physically weak condition.

The bird, which was unable to take flight, was found by one Ningthoujam Nabachandra at Khordak Mayai Leikai near his fish farm, PFA Manipur managing trustee L Biswajeet Meitei said in a statement.

There is no other bird like it in the entire world, meitei said, adding that the white colour of the bird is caused by a skin condition known as Leucistic.

The bird is strangely fascinating to look at with only its eyes being black while the rest of the body is all white, he said.

According to a scientist of Wildlife Institute of India, Dr Suresh, the kite probably belongs to the Brahminy Kite family.

Dr Suresh also said that it is an extremely rare occurrence since there is no earlier record of a white coloured Brahminy Kite due to it being Leucistic. Leucism is a skin condition that causes an imbalance in melanin resulting in an animal or bird being white-coloured, it said

The bird is usually found in places with plenty of watery areas, and its natural diet includes fish and crabs. The bird is native to India and Australia, the PFA said.

Due to its physically weak condition and inability to fly because of its damaged feathers, the bird is being kept at the shelter of PFA-Manipur.

The damage to the soft feathers of the bird might have been a result of some individual catching the bird and rearing it at home, or it could be due to bites from other kites that attacked it because of the difference in colour, the PFA added

It may be mentioned here that there have been instances where a white coloured Khoining (Bulbul) was spotted at Heirok, and an albino Sangai in Keibul Lamjao.