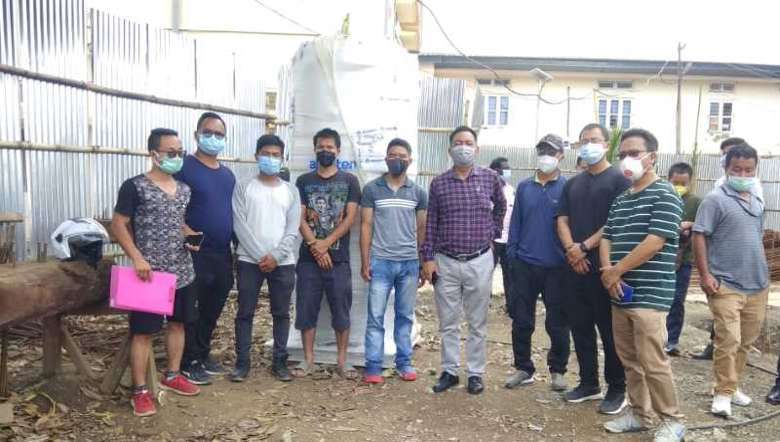 The machinery for the oxygen plant which will be installed in Churachandpur district hospital arrived late Wednesday.

“A power backup for maintaining 24-hour power supply is needed, and we are working on it through our engineers. We are hoping that the installation will be done in a few days but it depends on the engineers,” said Transport minister Vungzagin Valte.

Speaking at the Churachandpur oxygen plant complex this morning, minister Vungzagin Valte, who had gone to receive the Machinery at Imphal airport, said that the chief minister was keen on installation of the oxygen plant soon, and he had come this morning to see that all is well, he said.

Churachandpur district witnessed an all-time high of 64 positive cases (24 males and 40 females) in the last 24-hour. A total number of 24 people has recovered while active cases stood at 361 and a total of 25 persons have died till date.

Meanwhile, a team led by MLA of Singhat assembly constituency Ginsuanhau Zou on Thursday visited the Community Health Centre (CHC) Singhat to check on the preparedness of the doctors and nurses to fight the second wave of COVID-19.

Nine positive cases have been reported so far and are stationed at assembly constituency wise Covid isolation wards located at Singhat. The MLA also interacted with the staff of the CHC which presently has six doctors, including one Ayush Doctor and four nurses.

The team also earmarked the site for extension of a new building at the CHC which will house OPD, vaccination site, Isolation ward, staff quarter with the extension. It will have more than six rooms, for which the work will start tomorrow and the MLA will provide Rs 20 lakh and the Singhat village chief will donate Rs 5 lakh in remembrance of his late father MK Thomas who died last week.

The MLA also promised that apart from X-ray laboratories, ultrasound machines will be installed at the CHC site soon. The MO in charge of Singhat CHC thanked the MLA for the help and concern rendered to the CHC. The MLA also provided 50 PPE kits  along with a financial aid of Rs 50, 000 to the district hospital.