Does decline in deaths among elderly mean India is witnessing COVID-19 vaccine effect?

In three southern states and two major cities for which data are available, the share of the elderly in total deaths has begun to decline after vaccinations began, 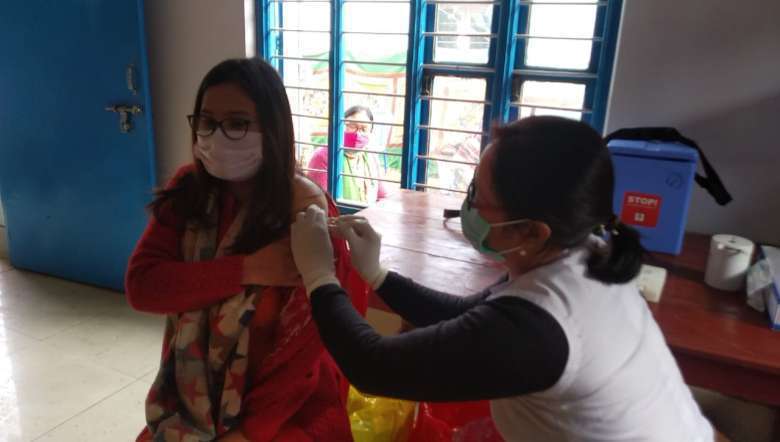 Is India beginning to see a COVID-19 vaccine effect? In three southern states and two major cities for which data are available, the share of the elderly in total deaths has begun to decline after vaccinations began for this demographic, an IndiaSpend analysis of data and interviews with experts show. The decline in share is not necessarily because cases and deaths among younger people have increased.

India began vaccinating healthcare and frontline workers on January 16, 2021; people over the age of 60 (and those over 45 years, with comorbidities) from March 1; people between the ages of 45 and 59 from April 1; and people between the ages of 18 and 44 from May 1. As of 3.30 p.m. on May 12, India has injected 137.3 million people with one dose of either Covishield or Covaxin, and a further 37.8 million people with both doses. Among those aged 60 and above, nearly 39 per cent have received at least one dose of a vaccine and just under 12 per cent have received both doses by May 11.

Vaccination coverage varies substantially by region. Kerala has vaccinated over 54 per cent of its population over the age of 60 with at least one dose, Karnataka 48 per cent and Maharashtra 40 per cent, while Tamil Nadu has the lowest at only 17%.

Both Covishield and Covaxin report a lowered likelihood of contracting mild, moderate and severe COVID-19 and of dying from COVID-19, two weeks after the first dose, and an even lower risk after receiving the second dose.

COVID deaths among elderly in Mumbai and Pune have fallen

In other parts of the world, a COVID-19 vaccine effect is now apparent: In the UK, for instance, death rates among the elderly began to decline earlier and faster than for younger people after the COVID-19 vaccination programme began. There are some early indications that we might be beginning to see the same in India.

A similar pattern is visible in Pune. Since the middle of April, the share of people aged 60 and above in weekly reported COVID-19 deaths has fallen to its lowest point since July and could fall below 50 per cent of deaths within two weeks if this trend continues.

Decline among elderly not due to disproportionate rise among younger people

Could this decreased share of cases among the elderly be a result of the virus or a variant disproportionately affecting younger people in the second wave, rather than a vaccine effect? While the central government does not systematically make public the age-wise break-up of people testing positive and dying of COVID-19, the government has said that fatality rates among younger people have not risen in the second wave. There was no difference in mortality, in the first and second wave, in those aged 40 and under, V.K. Paul, chair of the National Expert Group on Vaccine Administration for COVID-19 and member (health) of the Niti Aayog, said on April 21, 2020. In fact, the share of those over the age of 70 in total deaths had actually risen in 2021 over 2020, the data he presented showed. "There is no extra risk of younger people becoming COVID positive," he said.

This was reiterated by Balram Bhargava, director-general of the Indian Council of Medical Research (ICMR) on May 11. ICMR's analysis of hospitalised COVID-19 patients since August 2020 shows not much difference between the first and second waves, he said. People above the age of 40 are more vulnerable for adverse outcomes, and mortality among the hospitalised is between 9.6 per cent and 9.7 per cent, Bhargava said. Younger people are getting more affected because they have suddenly gone out and there are variants that may be affecting the younger people as well, he said.

State and city-level administrators largely agree. In Mumbai, for instance, while the share of those under the age of 60 in total deaths has grown, their share in total cases has grown too. Simultaneously, the likelihood of death from COVID-19 has declined for all age groups, data show and officials agree, but more sharply for those aged 60 years and above, than for others.

"We believe that deaths among the elderly are coming down as a result of our Mission Save Lives, which includes making sure that treatment protocols are standardised, severe cases are quickly hospitalised, consistent medical attention from doctors, and even measures to boost mental health, like arranging for video calls with the family," Suresh Kakani, additional municipal commissioner (health), Brihanmumbai Municipal Corporation, told IndiaSpend. Vaccines could be expected to have an impact on mortality rates among seniors, but it is early days, and clear data are not yet available, Kakani said. He said he does not believe that younger people have had worse outcomes in the second wave. "Mortality rates are coming down for all groups, including the elderly and the young," he said.

Officials in Tamil Nadu suggested that while there could be signs of a COVID-19 vaccine effect, the data are not conclusive yet. "We are seeing a decline in mortality among the elderly, but we have not yet done a study to assess whether this is a result of the vaccination drive," Vinay Kumar, joint director (immunisation), in Tamil Nadu's Directorate of Public Health, told IndiaSpend.

Epidemiologists suggested that a COVID-19 vaccine effect should be anticipated. "Both the vaccines being deployed by India have been proven to reduce the likelihood of developing infections, as well as of severe disease and death," Giridhar Babu, epidemiologist with the Public Health Foundation of India, and a member of Karnataka's COVID-19 Technical Advisory Committee, told IndiaSpend. "We should expect to see this impact on death rates among the elderly. I do not think this is an effect of the new wave disproportionately affecting younger people--if that were happening, we would see rising case fatality rates among younger people, which is not the case."

"We are seeing a fall in the share of health workers and the elderly in total deaths, and given that this is happening when the number of persons infected is soaring, this does appear to be a vaccine effect," Rajeev Sadanandan, Kerala's former health secretary and currently CEO of the non-profit Health Systems Transformation Platform, New Delhi, told IndiaSpend. "What this also means is that we have forfeited an opportunity to make a dent on the pandemic using the only effective pharmacological tool we have," Sadanandan said.

There has been a sharp slowdown in the pace of vaccinations, with multiple states reporting vaccine shortages, IndiaSpend reported in April 2021.

(This article was first published at IndiaSpend. Read the original article here)

An independent data journalist based in Chennai.