Growing up in a simple, lower middle class family, Oja Chinglen had a problem driven life. Most of his childhood and adolescence elapsed, struggling the many atrocities of life 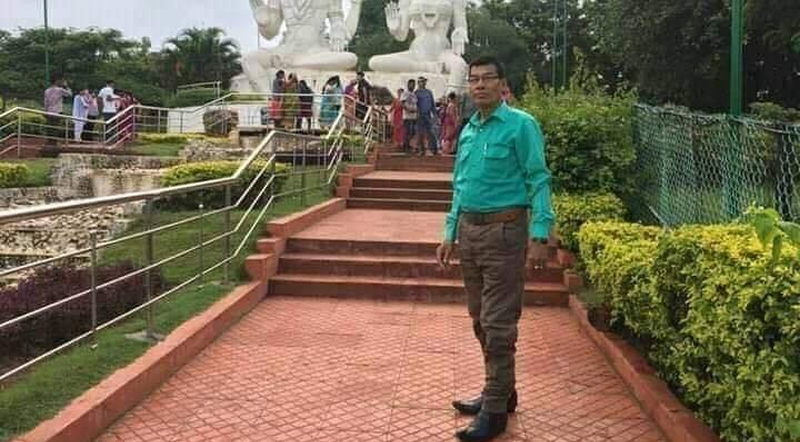 When we were still remembering and mourning the sacrifices of the martyrs of the great June Uprising, on June 18, the news of the sudden demise of legendary Sumang kumhei artiste Oja Chinglen Thiyam came in. It took me to my absolute dismay and couldn’t respond to the news. Few days ago while re-analysing his role in Khomlang Laman, I had made up my mind of interviewing him for my research. To express his sublime performances and the dedication of his body and the soul in the field of art is beyond the capacity of this space to accommodate. Today, we may disagree to elevate him to the level of the martyrs, yet, also disprove ourselves to put him below the level. The artists (at the least of Sumang Kumhei) commit themselves to the nation as much as the martyrs. By asserting and reasserting, and bringing into the consciousness of the people the multi-dimensional aspects of social issues, this theatre is in constant contestation, contending and holding up the challenges this society faces. It is this theatre form in Manipuri that animates the enshrouded mind keeping the agitation alive.

Performing the immanent, in an immanent way, Sumang Kumhei’s theatricality debunks the transcendental theatre forms. It is people’s theatre and to quote Oja Birjit Ngangomba, “the true power of Sumang Leela lies with the audience”. Sumang kumhei does not have a Director; the Manipuri term takpi tambiba cannot be translated as Director. The closer term I believe is Teacher. The Oja does not stand above and outside the theatre or to the other performers. This absence of hierarchy makes this theatre form structurally immanent. The senior performers are addressed as Oja or teacher. The Oja handholds and teaches the junior performers to bring out the self and the soul by employing the body as a medium. This is what Oja Chinglen expressed in one of his interviews when he says that the body weeps when the soul weeps. Whereas, tears may not roll down the cheeks, the expression of the face and the body-thawai hakchang says it all. “Not all cries are tearful” he says.

Growing up in a simple, lower middle class family, Oja Chinglen had a problem driven life. Most of his childhood and adolescence elapsed, struggling the many atrocities of life. Financial numbness however did not stupefy him from getting into theatres. Instead, these constraints power his robust performances. The common man experiences the real suffering of a society. He is the one who fights, stands in tough times of his fellow countrymen, protests and agitates in a manner both physical and mental. The un-common man is bound by something else; the Something restricts his physical presence in the fight. When the emotions engross the constraints, he may become a common man. The Naharol Khongthang Artists Association’s Khomlang Laman reflects upon this theme. The day is June the 18th, the police officer, who was performed out by Oja Chinglen returns home from his duty. On finding out that his sister hasn’t cooked anything special, he questions her. Their father had abstained himself from food for the day to observe the sacrifices of the martyrs. He warns her sister against the news of their family observing the day going beyond the walls of their home.  To this his sister evokes him of living a life so much intimidated that he cannot even mourn his fellow countryman’s martyrdom. To this he bristled, justifying his emotions to be as vigorous as the emotions any other. However, duty, seniors, the law and what not, restricts him. The dialogue, “even when I do not bow and offer flowers on to the grave of the brave martyrs, my inside weeps for the dead” justify the tied hands of the un-common man. As against the un-common man, a common man performed out by Narendra Ningomba signifies the tussles the common man is undergoing, if not for himself, for his motherland. All the struggles of his life as a common man makes Oja Chinglen an actor incontestable in his own sphere.

The class breaking structure and spatiality of the Sumang Kumhei makes it a people’s theatre. Unlike in the proscenium theatrefor instance, a woman is a witness to a Sumang Kumhei performance simultaneously breastfeeding her child. Oja Chinglen’s attachment to this theatre is evident when he says that his heart lies in Sumang kumhei. He is popular to the people as an orthodox Brahmin in his Keishamthong Thoibi, a notorious looser in Heiningjom Yumbal Telanga Yahip latter adapted in Manipuri Cinema by the same title. The recent performance Sanagi Nga, played in a series of three parts had popularized the Chinglen-Robindro duo in the Sumang Kumhei. They had become an ideal father and a mother for us. Oja Chinglen’s sudden decease is a set back to the audience as the duo will never be witnessed hereafter. Beginning as a villain Oja Chinglen became popular for his aggressive role of a Commando in the film Thawaina Punshigi damak. He was better known to us as Commando Chinglen. He ended up as a comedian, employing his versatility in comedy. For Sumang Kumhei, the role of a comedian is not a role lighter than any other role. It is on the other hand the most powerful character. Only the comedian thunderously questions the status quo. Augusto Boal says that “art is the imitation of the creative principles of nature”. This creative principle is performed out by the comedian. He performs out the alternative.

Through this piece, I would like to bid adieu to one of the most grounded and grass rooted performer, a lyricist and a teacher. He had celebrated his body’s resources by offering his soul to the theatre. He had sparked many ideas and had awoken in us many instances by his never fading energy till his very last breath. Alain Badiou says, “The theatre is an operation of transference, working according to the power of the performance upon the spectator.” It is therefore upon the spectator to decide what that is transferred.

The writer is a PhD Research Scholar at Tezpur University