A strong earthquake jolted Assam and mild intensity hit Manipur on Wednesday morning around 7.51 am. 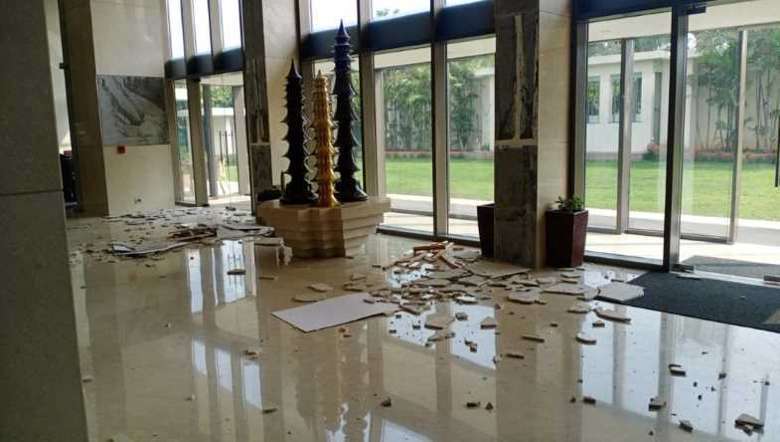 The impact of earthquake in Guwahati, Assam (PHOTO: Social media)

A strong earthquake of 6.4 magnitude on Richter Scale jolted Assam at 7.51 am Wednesday, with its epicentre at Dhekiajuli near Tezpur in Sonitpur district, according to the National Centre of Seismology.

The epicentre of the earthquake was located 43 km West of Tezpur, Latitude 26.69 and Longitude 92.36 km depth 17 km, the seismology centre said.

Some damages to houses and buildings were reported in Guwahati and different parts of Assam, while there were no reports of any casualty or injury in the state and no reports of damages to property in Manipur till the filing of this report.

Meanwhile, Prime Minister Narendra Modi and Union Home Minister Amit Shah took stock of the situation and assured to extend all possible help from the Centre.

"Spoke to Assam CM Shri @sarbanandsonwal Ji regarding the earthquake in parts of the state. Assured all possible help from the Centre. I pray for the well-being of the people of Assam," PM Modi tweeted.

The union home minister also prayed for the safety and well-being of the people in Assam.

"Have spoken to the Chief Minister of Assam, Shri @sarbanandsonwal ji, to assess the condition in different parts of the state after an earthquake. The central government stands firmly with our sisters and brothers of Assam. Praying for everyone’s safety and well-being," Shah tweeted.