From the increasing positivity rate that Manipur has been witnessing in recent past, one may infer that the second wave has perhaps arrived. Aggressive COVID-19 testing will show higher absolute positive figure. 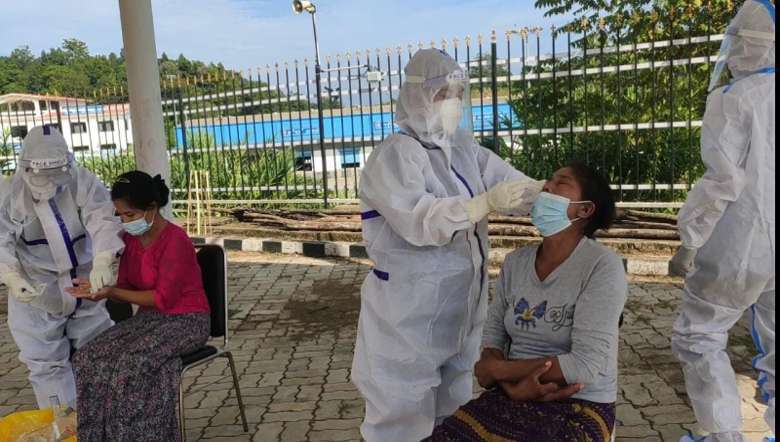 We have the experience of the first wave and the government should be better prepared despite the fact that it will be as challenging as in the first wave. This time, there is no national lockdown which had caused tremendous hardship with limited benefit and now the restrictions were left to the states; the correct procedure. There are certain limitations now like the non-availability of Remdesivir the antiviral which is used on experimental basis on severe COVID patients, though the government is trying hard to stock the medicine.

One factor which complicates the second wave is the rise of variants of concern, some of which may later on qualify as variants of consequence or variant of high consequence. It has been reported that the UK strain (B.1.1.7), South Africa strain (B.1.351), Brazilian strain (P.1), US strains (B.1.427 & B.1.429) and the Indian strain (B.1.617) are all detected in India though it has been informed that till now, from the samples sent from Manipur for genome sequencing, only the wild-type strain have been found. But the gut feeling is that there must have been some cases of variant of concern as many of those found positive are returnees from other states. These variants were 1.7 to 2.5 times more transmittable and it infects those who are below 40 more than the wild type strain. Another complication is the recent report in Lancet that the virus is airborne, which will perforce the change in the type of mask to be effective. Woven fabric mask will have limited value and only mask with spun materials like three-layer surgical mask, N95 or KN95 will be effective.

However, one factor which put in advantage is the vaccination programme which had got slightly more than one hundred thousand given the vaccine. However, with about nearly half receiving only the first dose, the benefits still will be marginal. The rate of vaccination is slow vis a vis the All-India figure, at about half. One really doesn’t know why the vaccination drive was called Tika Utsav, as if it is a festival. It should be a crusade or a movement taking into consideration its import. But no, it seems everything was taken light heartedly! It reminds of Covisil developed by an Ayurvedic firm and released by the Union Health Minister claiming without proof to be effective against COVID but was made to retract the claim when a hue and cry was raised. Please see the name also, it rhymes with Covishield, the vaccines of Oxford Astra Zeneca which is produced and marketed by Serum Institute of India and one can read the mischief behind the tamasha!

The tragedy in Manipur is that despite the fact that the public are aware of the safety measures hardly any serious precautions were observed. Government no doubt is being proactive in the sense that Thabal Chongba and Shumang Kumhei were banned but were still organised with lesser crowd. Musical nights continued without any concern. Classes 5-8 were discontinued and recently even classes 9-12 was closed though all classes can continue by online mode. The number of participants in religious rites was restricted but many sporting events continue without the laid down protocols being followed. Sporting events with contacts, without observing the protocols especially those among the spectators may be a spreading event.

Government have imposed night curfew as also roster for shop opening in the Khwairamband keithel but unfortunately in the outlying markets there is limited check on whether the SoPs are followed and steps to enforce it. As mentioned ad nauseaum, issuing orders is only the first small step; the enforcement is what gives value to the order. There is a need for police to be proactive by stepping in using PA system to ensure that both the vendors and the buyers uses masks properly; not hanging on their chin. People also must be aware that if things go out of control, Government despite the fact that lockdown is a major economic dampener may have no alternative but to enforce it with tremendous hardship to the common people. Has Pelzman Effect come into operation? Pelzman effect says that people are more likely to engage in risky behaviour when security measures are mandated. There seems a belief that the first dose of vaccine can make one safe and go back to the old life. Even after the second dose all are not protected, only ranging from 72-92 percent depending on the timing of the second dose and immunity is raised after two weeks of the second jab. Even those who have been giving both the doses have to continue wearing mask and there is no way to avoid mask at the present.

The regulation of office attendance to ensure lesser staff to ensure physical distancing is welcomed but those attending office must ensure Covid appropriate behaviour. What about physical classes in colleges and universities? There is a need for uniform application of restrictions; less it may indicate a knee jerk reaction rather than a systematic and unified approach in the fight against Covid-19.

As mentioned time and again in this column, the disease cannot be fought by either the government or the people alone; it has to be a joint effort. And we have to be watchful till a cure to it is developed. Vaccine is the first step and medicine to cure it is the most important step for which all waiting, but still unlikely.

Government must ensure that sufficient beds including ICU with ventilators both intrusive and non intrusive are available. Government may need to revive both quarantine centres and the even Covid care centres as many households may not have sufficient space in their homes to properly isolate a person. Strict testing of all arrivals either by air or surface which has been put in place must be strictly enforced and till the result is out, they should be quarantined. Sufficient RT-PCR kits must be stocked so that majority of the tests conducted should be through RT-PCR, TRUNAT or CBNAAT and RAT should constitute only about 25% as announced by the Prime Minister. Oxygen must also be ensured and the decision to operationalise the unit under Shija Foundation is a step in the right direction.

As in the first wave, there will be complaints from those in other states on the condition of allowing entry of only those with negative report. The pressure will be great to allow all to come subject to quarantine them till they are reported negative. Such a situation may lead to transmission in the quarantine centres and home quarantine is not a good option as it is violated in random as seen in the past. The government needs to ponder over such claims before a final call is made.

On the side of the public, everyone must make an effort to ensure that the transmission is reduced by properly abiding the SOP of washing hands with soap and water or sanitised with alcohol-based sanitisers as required, wearing correct masks properly (the claim that buying mask puts a drain on the pocket is not justified as large section continue chewing pan costing Rs 30 a piece), maintaining physical distancing, avoiding crowds, avoid mixing with people indoors (transmission in indoors is 19 times higher than in outdoors), etc; but the most important is wearing proper mask correctly. Those who are not contraindicated and eligible must get their vaccine shots, as despite claims of some very limited serious side effects, the benefits far outweigh them.