IFP Editorial: Now that the said stone crushing units have been found to be flouting all norms and violating the conditions as laid down in the Location of Factories Rule, 2013 under the Factories Act 1948 the names of the owners of the said units should be made public as well as extending exemplary punishment to them. 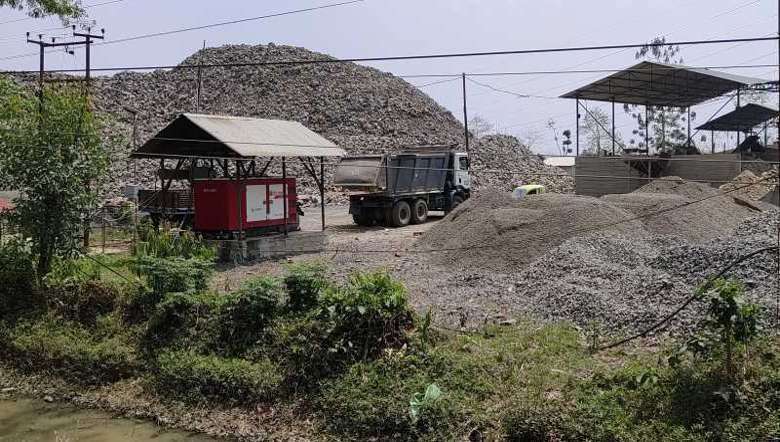 Sometime back, Manipur Pollution Control Board authorities cautioned the public about high levels of air pollution in a few areas of the Imphal West district. That and a public complaint from Moidangpok and New Keithelmanbi area regarding stone crushing units woke up the concerned state agencies from its usual slumber leading to a surprise inspection of the said units. In view of the public complaint, officials from the Directorate of Trade, Commerce and Industry inspected the stome crushing units along with members of the JAC comprising of locals from Moidangpok, New Keithelmanbi and Moidangpok Khunou in tow on Monday. Increase in illegal stone crushing units along the stretch of road between Moidangpok to New Keithelmanbi areas is posing unbearable air and noise pollution among other problems to the people living in nearby places. The Manipur government’s Location of Factories Rule, 2013 under the Factories Act 1948 clearly stated guidelines for setting up of stone crushing units. According to the Location of Factories Rule, 2013, no stone crushing factory is allowed to install its stone crushing machine and operate within the limit of 300 metres on national highways or state highways, and 100 metres of link roads and other district roads boundary. It should be located 300 metres away from residential areas, educational institutions, historical places, religious places, zoological parks, wildlife sanctuaries and hospital. The stone crushing units also violate the Manipur Conservation of Paddy Land and Wetland Act 2014. Most of the stone crushing units are set up in paddy land, by the roadside and some within 300 m of highways and residential areas.

Upon inspection, the officials found eight stone crushing units set up at Moidangpok and Keithelmanbi areas could not produce relevant documents and also violated the conditions set in the Act. As such, the officials of the Directorate of Trade, Commerce and Industry has assured to take legal action against those units. The general complaint of the locals was that unloading of boulders which is considered as raw material for stone crushing units and non-stop crushing process every day, particularly during midnight creates heavy air and noise pollution. The nearby areas remain dusty throughout the day. A private school at Moidangpok is on the verge of closing down following complaints from parents and guardians as one such stone crushing unit had been set up adjacent to it. With the growing number of stone crushing units in the general area, farmers in the affected areas could not carry out their agricultural activities like before. The air pollution had become so unbearable that it is affecting their health and there is a rise in respiratory problems, while the said units also hamper in going to their fields for work due to fencing by the units.

Well, now that the said stone crushing units have been found to be flouting all norms and violating the conditions as laid down in the Location of Factories Rule, 2013 under the Factories Act 1948 the names of the owners of the said units should be made public as well as extending exemplary punishment to them. No doubt, the owners would certainly be from mostly among the neo-rich special contractors with connections to the political bosses or it could even be the big-shot politicians themselves. It is not that the owners did not know the conditions set under the Act, but they rather chose to ignore them because of their powerful friends. That is exactly why, the names of the units needs to be made public, so that compensation could be sought from them for causing harm to the health of the people of the area.