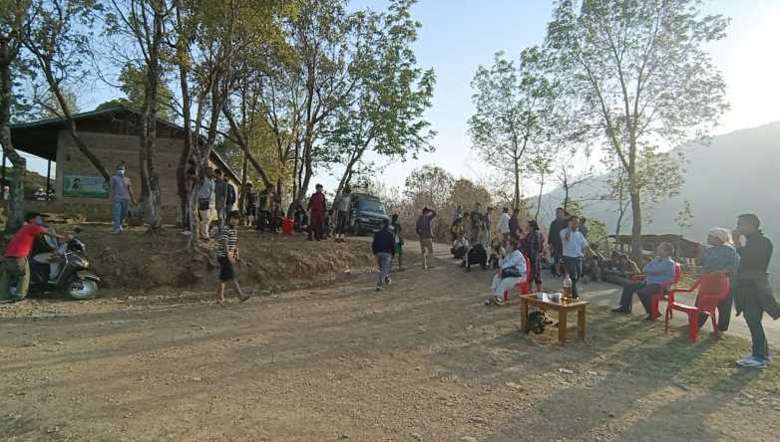 Several villagers, including village chiefs, womenfolk, youths, and civil body leaders of Kangpokpi district in Manipur gathered at L Mangjol village in the foothills of Mt Koubru on Tuesday morning and confronted police personnel who came to climb up the hill.

Meanwhile, despite the reported closure of all entry points, some people were seen coming down from the peak while some were seen climbing the peak without any restriction.

Speaking on the sidelines of the protest, advisor, advisor of the Committee Tongmang Haokip said the entry points of Mt Koubru were closed down with the intention to get response from the government, but it was ignored and security forces were deployed at the peak to conduct the survey.

He said, “The police officials told us that they have come following the closure of entry points of Mt Koubru as published in various newspapers.”

He asserted that the problems cannot be solved by any form of coercion but by negotiation which the state government ignored till today.

He said considering the necessity of protecting and preserving Mt Koubru, the Committee was formed in 2018.

He said that after such written objections, the government was expected to invite them for negotiation but sent out a survey team to earmark certain areas of the peak for culture and heritage centre.

A joint meeting of all village chiefs in Saitu Gamphazol, Committee on Protection and Preservation of Mt. Koubru, SAHILCA and civil bodies were held at Saitu.