AHTA warns to intensify agitation over non-release of MGNREGS fund

Effective by April 13, we will start the agitation which will be joined and supported by all the job card holders of the district, All Hunphun Tang Association president Chonmi Raleng said. 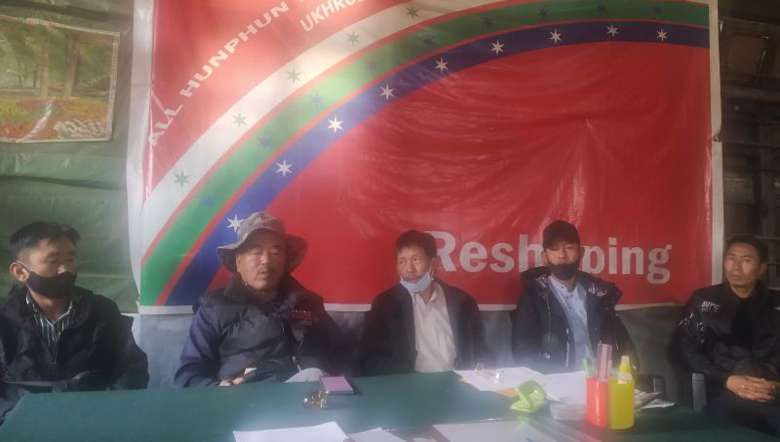 Decrying the state government over non-release of centrally sponsored rural centric MGNREGS fund of 43 days to the job card holders of Ukhrul district, the All Hunphun Tang Association (AHTA), an apex body of the 28 Hunphun localities has threatened to launch an intense agitations if the government fails to respond to the people’s voice.

Speaking to the media persons, the president of AHTA Chonmi Raleng said, “Until the government releases the due amount to the district, we would continue to hold a series of agitations. Effective by April 13, we will start the agitation which will be joined and supported by all the job card holders of the district.”

He warned that state government and district administration will be held accountable for any untoward eventuality over the issue.

Recalling the interaction he had with the Rural Development (RD) Minister Biswajit at Khayang on April 5, Chonmi said that he had been verbally told by the minister that 485 crore amount had been sanctioned and assured to send the copy of the sanctioned amount. However, no such copy was received from the minister, he added.

AHTA administration secretary, Angam R Shimray supplemented that the RD minister had assured in August last year that the government will pay the liabilities of 50 days wages upon completion of the works. However, of the total 50 days only the amount for seven days had been paid so far even after the lapse of six months.

Talking about the hardships faced by the unemployed returnees following COVID outbreak, Shimray asserted that those unemployed youths who have attained the age of 18 are willing to work and they should be given a job card.

The present government does not seem to listen to the voice of the public, AHTA alleged and questioned the silence of the district MLAs on the issue.