Mr Thadou and Miss Thadou were awarded cash prizes of Rs. 1 lakh each along with a certificate. 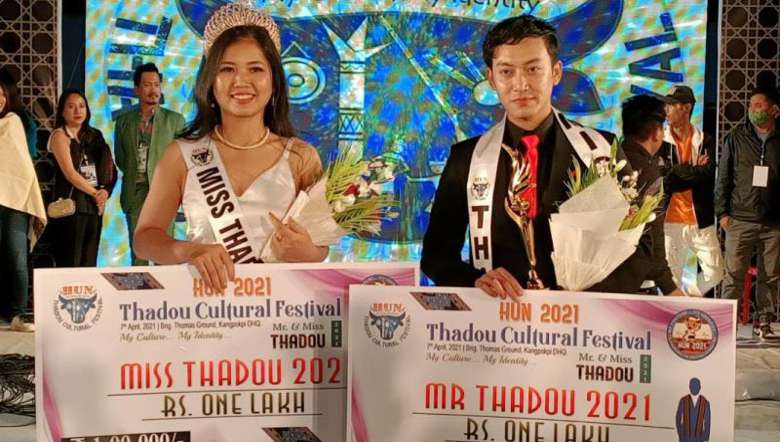 Miss Thadou 2021, Precilla Lhingngaiching Haokip is a resident of Gamnom veng, Ward No 2 from Moreh border town. The 21-year-old graduate and gorgeous girl is a daughter of Stephen Thongminlen Haokip and Hoineikim Haokip.

The sub title winners were awarded with a cash prize of Rs. 5,000 each with certificates.

A famous music band from remote village of Jangnoi village in Lhungtin Sub Division of Saikul area in Kangpokpi called Jangnoi Indoi Band performed live on the stage as the Hun band enthralled the crowd with their awe-inspiring numbers with Kaineo Chongloi as the vocalist.

Former Autonomous District Council Sadar Hills chairman Haokholal Hangshing who attedned the Hun night as chief guest in place of PHED Minister Losii Dikho said that Hun celebration reminded him of his childhood days as at this time of seeds sowing a bird called 'Muchi Tun Tun' nostalgic humming echoed the entire hills giving message to the people that the seeds sowing season has arrived.

He said that Hun - the cultural festival of the Thadou community will definitely serve as a platform to bridge the gap of the community and bring unity, peace and tranquility in the society.

How Thadou tribe sows the seeds of peace, love and unity as they celebrate Hun Festival 2021