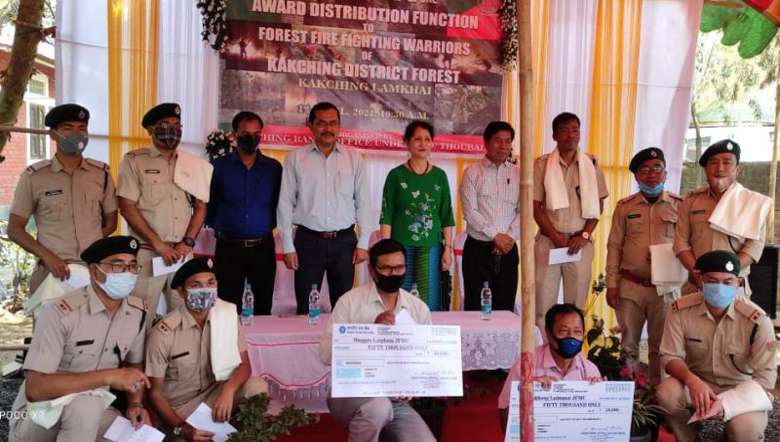 The award distribution event was organised by Kakching Range at its office complex located at Kakching Lamkhai on Thursday. The programme was  attended by deputy commissioner of Kakching, K Zuringla; DFO of Thoubal, Th Lokendro; range forest officer of Kakching, Naorem Munal Meitei; team leader of Forest Survey of India, Subash Pal; and forest beat officers from Pallel, Waikhong and Wangoo Lamkhai and several concerned people of wildlife and biodiversity.

The eight forest firefighters were awarded with Rs 1,000 each while the two JMMCs namely Wangoo Laipham and Waikhong Laimanai were awarded Rs 5,000 each. They have been awarded for their bravery in extinguishing the wildfires that occurred last year.

Giving his keynote address, N Munal Meitei informed that it will be the first one in the state to extend awards to the brave forest firefighters. He further stated that forest wildfire directly destroys the entire biodiversity of an area upon which survival of mankind depends upon. Forest fire severely affects the soil fertility, reduces water retention capacity and enhances soil erosion. Smoke and particulate materials released due to wildfires lead to massive air pollution up to a considerable distance. These particles can penetrate deep into human lungs and cause health problems like coughing, sore throats, extreme wheezing, cardiovascular and various respiratory diseases, he added.

He also said that setting fire in the forest is an offence under Section 26 of the Indian Forest Act, 1927 and rule number 9 of the Manipur Forest Rules, 1971 and the offender is punishable with imprisonment for six months or fine up to Rs 10,000. The offender is also liable to pay compensation for the damages in the forest and also the cost for raising plantation over the burnt area. He continued  that any person who enjoys rights or benefits from the reserved forest land or any government servant residing around the forest land are bound to prevent, control or extinguish the fire and assist the forest officials in extinguishing of the fire as provided under Section 79 of the act and rule no.10 of the Manipur Forest Rules 1971. The existing environmental assessment value of Manipur is Rs 15 lakh to Rs 20 lakh per hectare and this should be noted down by every person of the state, he added.