What happens in Myanmar is a humanitarian crisis that calls for international intervention on humanitarian grounds. 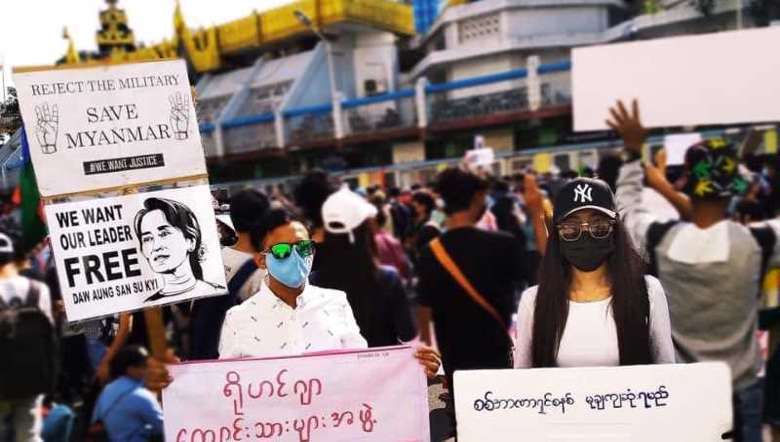 It is today needless to tell of the chaos that Myanmar is going through. Since the military coup, Myanmar has been but a land of savagery and chaos, particularly of barbarous killings and inhuman tortures against helpless civilians carried out mainly by the Tatmadaw, the Myanmar military, lately coming to be tagged as a terrorist organization by the people. The situation evidently is simply devastating and despairing for both the country and the international community.

Not long after the coup, the military has turned the country into a war-zone. The people who are holding peaceful processions are confronted with live bullets and other lethal weapons causing immeasurable damage to life and property and worsening the situation of this ill-fated state. The military has been solely responsible for mass killings of protesters, including women and children with the number of deaths rising everyday. The killings and the response of the military as a whole are becoming more and more brutal and ruthless as they fight for power. Undoubtedly, these are more than grave violations of human rights that calls for the attention of the international community.

It is impossible to imagine the agony and the hopelessness that the people of Myanmar are going through as their freedoms have been seized, their homes taken away, and their families being broken in the hands of the military. The military are denying the essence of life to the people and also utterly violating their rights. It is also clear that the people are running out of options from the military aggressions. As a result, they are reported to have started to build bunkers as a measure against air bombings, while there are others running away from their homes into the forest for safety. Moreover, hundreds of youths are also believed to be joining hands with the Federal Army, an army of nationalist movements united against the Myanmar military, with hopes to regain their homes and their freedom.

At this point, the people of Myanmar as well as the rest of the world are looking at the leaders of the international community, particularly the United Nations and other humanitarian organisations, to act as a saviour for the people of Myanmar and hear their cries for help. While the situations have heightened and the killings of civilians are incessant, the world must no longer look at it as an internal issue that must be internally solved. Rather, what happens in Myanmar is a humanitarian crisis that calls for international intervention on humanitarian grounds. The war that the military declared on the people is a war against humanity and must be fittingly responded. The people of Myanmar cannot be left alone to defend for themselves.

The international community cannot look away, it must warn the Myanmar military against the  alarming violations of Human Rights. The CCTV footages of bikers mercilessly shot at a point-blank range must not go unnoticed and must be fought back. The heinous deaths of men, women, and children cannot go waste but it must shape a better future for the people, their aspirations, and their land. This is a challenge for the international community, especially its leaders, on how far it can  go to protect and promote the rights and well-being of an individual. On the other hand, it will be really unfortunate if people were to lose faith on humanity and the international community that would only mean more chaos and confusions.

The world must act fast now and save Myanmar from its own guns and bullets. Let the world remind itself that Human lives are more than economic prosperity, and the wicked hunger for power.  The worlds biggest powers should be reminded to look away from business opportunities  but rather look onto the people as belonging to the same human kind. Let us be more humane that we are, and stands as a relief for the people of Myanmar. Especially for its neighboring countries as ourselves, let us not think twice to accept them into our lands and honor their rights to life and personal liberty. We cannot send them back to die.