Various recommendations made to prevent substance abuse in Thoubal

During the seminar, recommendations were made for treatment of drug addiction, motivation and encouragement for treatment and early prevention up to the age of 18 years. 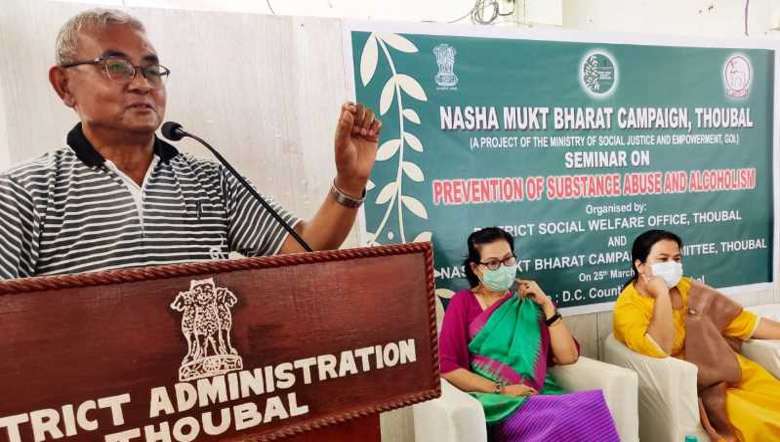 A one-day district level seminar on Prevention of Substance Abuse and Alcoholism was held at the election counting hall at DC Office Complex, Thoubal district on Thursday.

The seminar was organised by District Social Welfare Office Thoubal and Nasha Mukt Bharat Campaign Committee (NMBCC) Thoubal, focussing on the need and role of every section of the society in the prevention of drug abuse and alcoholism.

During the seminar, recommendations were made for treatment of drug addiction, motivation and encouragement for treatment and early prevention up to the age of 18 years. Regulation of alcohol manufacturing was also recommended so as to decrease the harmful health effects and alcohol adulteration. It further discussed on the inclusion of awareness on the dangerous effects of drugs in the school curriculum in a phase manner.

Methods for nabbing the drug smugglers by the law enforcing agencies were also pointed out the need to be improvised by adopting successful methods that had been used in other countries.

Delivering his keynote address, NMBCC member, N Lakshman elaborately put forward the various activities conducted so far by the NMBCC, Thoubal and also explained the main focus of the campaign as the primary prevention of drug abuse targeting the youths, adolescents and the students.

Representatives from the medical, education and police departments and volunteers from ICDS, NYK, NSS and master students were the main participants in the programme.

N Bandana briefed about the activities and achievements of the NMBCC Thoubal and further emphasised the need for the seminar to improve the knowledge about drug abuse and appealed to put efforts together and join hands in the prevention of drug abuse.

Resource person Koijam Shantibala spoke about the need for prevention of substance abuse and alcoholism and the various factors leading to drug abuse, its effects on the physical, mental wellbeing of the person, societal effects and others.

Speaking about the role of every section of the society in the prevention of drug abuse and alcoholism, RK Nimai expressed for a holistic approach in dealing with the issues of drug abuse in the state.