Manipur gets its first Transgender Health and Wellness Centre at JNIMS

Asserting that more people are beginning to accept transgender in the society, MLA Dr S Ranjan, who is also the advisor (Health) to the chief minister, stated that the people of Manipur are proud of the progress made by the transgenders of the state. 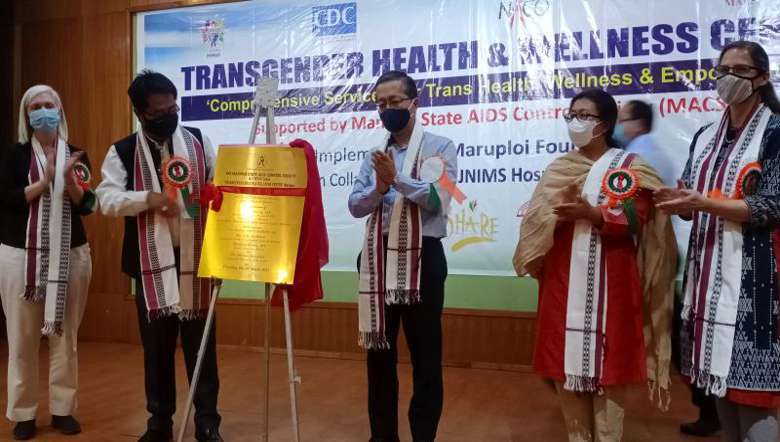 The first Transgender Health and Wellness Centre in Manipur was inaugurated at JNIMS in Imphal East on Thursday. The inaugural function was virtually held at Hotel Classic Grande, Imphal.

Addressing the inauguration of the wellness centre for the transgenders in the state as chief guest, MLA Dr S Ranjan said that the transgender community of Manipur have been told to get registered in electoral roll (transgender category) of the state. The date will also be helpful for the government to rely on in taking up any developmental or welfare works of  the trans community, Ranjan, who is also the advisor (Health) to the chief minister of Manipur said.

It is indeed shocking to learn that only 94 transgenders are registered in the electoral, where the numbers of transgender community in the state is likely to be way more above than 2,500, he said.

Lauding MACS and ITECH for establishing such clinic for the special (transgender) community who are facing acute stigma, discrimination and lack of family support, he stressed the need of conducting awareness programmes in different  areas of the state.

The MLA also mentioned at the inaugural function of the wellness centre and help desk organised by the Manipur State AIDS Control Society (MACS) and ITECH India, that one’s contribution and support is needed to give the right of wellness and healthiness of the transgender community.

Asserting that more people are beginning to accept transgenders in the society, Ranjan stated that the people of Manipur are proud of the progress made by the transgenders of Manipur in the field of fashion designing, make-up artistes and others.

Stating that people have started witnessing the emerging of many international acclaimed personalities from the transgender community, he asked the transgenders community to not hesitate in speaking out their mind as most of the misunderstanding arise from communication gap.

Asserting that the government is working proactively for the well being of the transgenders community, he cited the setting up of a quarantine centre for the them during the worst period of the COVID-19 pandemic.

Further mentioning that transgender is one of the communities which will bring the state forward, he stated, “Don’t let the stigma or discrimination be the barrier to your goal.  Be proud of what you are and work with the spirit of ‘Yes I can.”

Speaking as guest of honour, US Consulate General, Kolkata Patti Hoffman said that he is honoured to attend the inaugural of the transgender clinic in Imphal, which is a partnership project between the United States and India.

“We want to work with governments and organisations to end violence and discrimination based on sexual orientation and gender identity or expression,” added Hoffman.