As many as 300 SPOs of Heirok donated Rs 50,000 to RPN Memorial Trust. Four commanders as representatives of the SPOs handed over the money to vice president Laishram Samer. 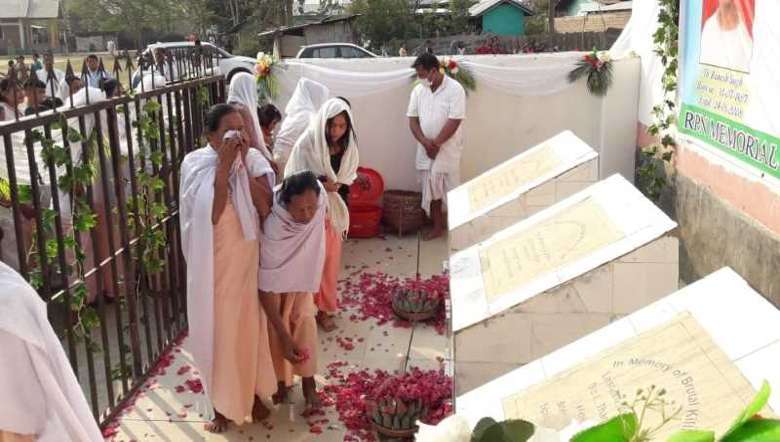 The Heirok shooting incident in which armed gunmen sprayed bullets at a ground where people gathered to take part in a Thabal Chongba dance, leading to the death of three youths, including two girls, was remembered in its 13th anniversary at the community hall of Umang Laikol, Heirok part I on Wednesday.

During the occasion observed with the theme, ‘Mangal piba Numit’ (Day of awakening), floral tributes led by MLA Hiyanglam assembly constituency Yumnam Radheshyam, were offered at the memorial site of Thokchom Romesh,Thokchom Premila and Laishram Nirmala near the community hall of Umang Laikol.

Family members of the deceased including people from far and wide came to take part at the occasion which was organised by RPN Memorial Trust Heirok.

Three hundred Special Police Officers (SPOs) (later renamed as VDFs) arrived and bowed before the memorial site as a mark of respect to the departed souls.

Speaking as the chief guest, Y Radheshyam recalled the tragic incident and prayed that such an event never takes place again in the state. Although the lives of three youths were taken on that fateful day, they had left a message of peace not only in Heirok but across the entire Manipur, he said.

“It would not be an overstatement to say that these SPOs we are seeing now, was a gift to the people of Heirok from the three youths who had died,” he said.

If the SPOs were not established after the incident, the Village Defense Force (VDFs) would have existed in Manipur, he said.

VDFs are not taking a major role in maintaining law and order in the state; therefore, it would not be wrong to claim that the Heirok shooting incident led the authorities to govern the state in peace, he added.

Following the incident, a junior high school at Heirok was upgraded to a High school and High School to a Higher Secondary, he said.  Above that, a Primary Health Centre of Heirok was also upgraded to a CHC, he further said adding these changes showed that the three youths left a path to development and progress.

As a part of the occasion, 300 SPOs of Heirok donated a sum of Rs. 50,000 to RPN Memorial Trust. Four commanders as representatives of the SPOs handed over the money to vice president Laishram Samer.