Filmaker Sonia Nepram’s query why do the phanek which is worn by her so lovingly; be regarded as impure and the quest is to unravel the mystique while also looking into the changing perception on it in Meitei society. 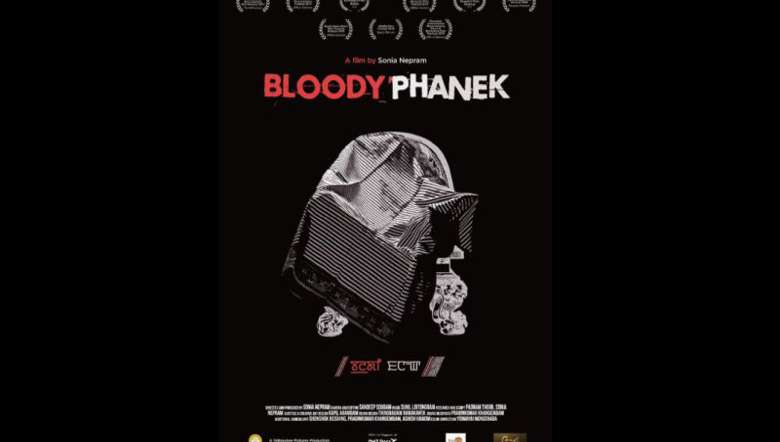 This year’s International Women Day was a hectic affair. This writer after attending the CAU Agri Fair was fortunate to reach MSFDC Auditorium in the nick of time to watch Sonia Nepram’s “Bloody Phanek”. This film was heard since 2018 but Manipuri audience never had the opportunity to see and all were very curious about the film. The influence of the film’s title can be seen that many ladies including those who hardly wear phanek came to the hall wearing it. The title perhaps acts as a magnet for the Manipuri cineaste. This film which was pitched at DocEdge and financed by DMZ Doc Fund, South Korea has been making waves and had participated in a number of well known film festivals in Asia and Europe.

Who better than the film maker, a sociologist by training with a PG degree in MassCom, to handle such a sensitive but important and relevant topic? And the outcome deserves praise as the topic was sensitively and adroitly handled. The film starts with two little girls thrilled in wearing the phanek for the first time and the joy must have been shared by all female Meitei, irrespective of age and must have brought in a sense of nostalgia. The filmmaker’s query why do the phanek which is worn by her so lovingly; be regarded as impure and the quest is to unravel the mystique while also looking into the changing perception on it in Meitei society.

The film attempts to unfold the enigma of the phanek through a series of intimate interactions with various people, both male and female, as it is regarded not only as impure once it is used and the male cannot even touch it, while on the other hand it is regarded as imbued with such power that a mother’s phanek can ward off all evils. In fact if a phanek is hung on the clothesline, a man is not permitted to even walk under it. The tradition of giving a piece of mother’s phanek when a man set out for a journey was the practice till about a few decades back. The film successfully brings out the traditions and culture on the phanek through the sensitive interviews though some of those who were interviewed seems to lack the knowledge on the subject, hedging a reply, though the village folks and the women vendors are more open to their understanding. The film maker who is the interviewer in the film showed her skill, which was also seen live during the interaction after the screening. She is especially good when interacting with the rural folk and women vendors who came out as open and genuine and their answers are simple and to the point.

The incorporation of a clip of the very controversial scene of Kalakshetra’s Draupadi which led to a very strong debate on nudity on the stage brings to fore the power of the phanek and life imitates art on 15th July 2004 when ladies disrobed themselves in front of the western gate of Kangla agitating against AFSPA. So is the scene of students in phanek agitating and fighting against the police. Such scenes symbolise the evolution of the power of phanek to protect society against all evil, emphasising the belief in Meitei society that it wards from evil spirit. These scenes tries to interpret that this garment which is regarded as both good and evil have now been seen as a symbol of protest in Manipur; which we now also see in Myanmar. And rightly so, as women is in the forefront of any agitation in the state.

The 2004 event when a student body enforced a ban on the use of other dresses; be it western or Indian; by girl students up to Class XII in the schools perhaps led to a sense of discrimination among the females including the filmmaker. Why force only the females to be the custodian of our culture while males can wear anything they like and questions were then raised whether it was a result of Male Chauvinism? This enforcement though led to the revival of the tottering handloom sector and improved the economy of the women folk. But after about a decade or so, due to high demand of phanek, it led to the adoption of power looms for the production of phanek, which may be the death knell of the handloom sector which may only be continued by a few highly skilled artisans to produce high quality products and no longer the sector for mass employment.

The elegance of the phanek can be seen in the clip of the performance of Pena shakpa and the artist’s view that it is very comfortable to wear is echoed by a Punjabi friend of this writer who says that it is light, comfy and ideal for the hot summer in Punjab.

When an aspect of a culture is examined, it would have been ideal to compare the belief on it in other cultures. This would have made the audience understand the loci of phanek and its counterpart vis a vis in other cultures. The audience will be forced to ponder into whether the belief system among the Meitei society is home grown or borrowed from other cultures. This is despite the fact that though it was explained in the film the reason why phanek was regarded as impure. The belief of the Meitei on phanek is similar to those of Myanmarese on their superstition on Taman, a type of sarong worn by the ladies. Sarong is regarded similarly as impure though imbued with extraordinary power in most cultures in South East and East Asia. In Myanmar, the sarong is regarded as protector and man takes small pieces of Taman while going to battle, with the belief that it will protect from all danger like a mother protecting her child from danger. It is regarded as auspicious. Even among the Loatian, it is believed that anything worn below the waist of women is considered to possess special power and thus the uppermost part the three pieces stitched together Sinhs is the source of personal power, while the lowermost which is most decorated is regarded as impure. In a society where the oral tradition is in the forefront, there can be various versions for the belief system. As a sociologist a bit more was expected from the film maker. Interview with some of our hill sisters would have brought in another dimension on the topic.

In the primitive society when almost all serious illnesses were blamed on evil spirits, such garment were regarded to drive away them. The funny thing seen in the film is that those who articulated in Manipuri are more knowledgeable on the topic than those who do so in English. It negates the common belief that the ability to communicate in English makes one educated!

Though the film maker during the interaction after the screening says that she has both reasons and no reasons for the ‘Bloody’ in the title, it makes a good title having the ability to ponder and attract viewers and makes one wonder about the film before and even after seeing it. The film is tight and attempts to trace the mystique of the garment and its evolution as a symbol of protest and deserves all the accolades it has received. Kudos to the film maker!