The Manipur CM said that there are plans to open more courts in the new districts as well as old districts where there are no courts at all, in a phased manner in consultation with the High Court. 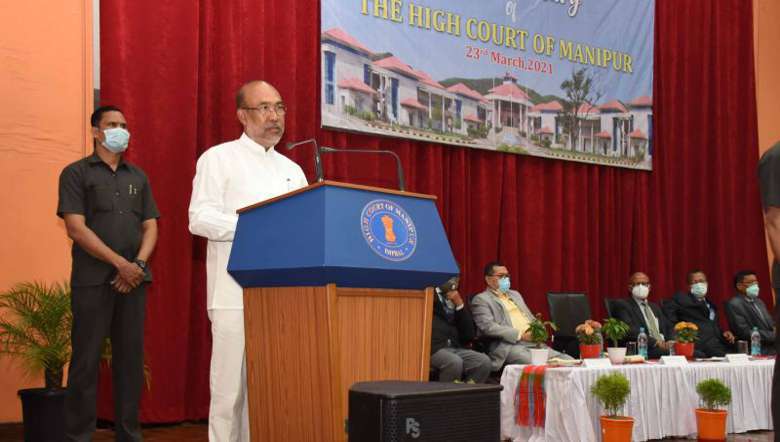 Manipur Chief Minister N Biren Singh during the 8th anniversary celebration of the High Court of Manipur on Tuesday assured that the state government will make efforts to arrange funds for various ongoing and new projects for the judiciary from various sources.

Speaking to the gathering at the High Court conference hall, he highlighted that there has been occasional strains in the relation between executive and judiciary. Such instances are neither new nor unique to the state and are in fact a healthy aspect of a good democracy, he said.

“We must be committed to strengthening the cooperation between judiciary and executive under the constitutional scheme of things. The judiciary will appreciate the compulsion and circumstance of the executive towards its efforts to achieve development goals for the welfare of its people,” he said.

Further, as decided in All India Chief Minister and Chief Justice Conferences, the state government will consider the creation of a new post of secretary (judicial) to be manned by a judiciary officer of Grade-1 for better coordination between the state and judiciary. Formal proposals may be submitted in this regard for taking up necessary action, he said.

He said there are plans to open more courts in the new districts as well as old districts where there are no courts at all, in a phased manner in consultation with the High Court.

In the current year, the government has started taking steps for the development of infrastructure for the courts. Rs 9 crore was allocated in RE 2020-21 and Rs 21 crore in BE 2021-22 for construction of district court buildings in Kakching, Noney and Senapati, he mentioned. Foundation stones will be laid soon for these three district courts, he added.

He said that for the construction of Manipur Judicial Academy, Pangei, Rs 5 crore was allocated in RE 2020-21 and Rs 10 crore in BE 2021-22. The construction of the building will start soon, he assured, adding the Academy will help immensely in facilitating building capacity of judges, prosecutors, lawyers and counselors of Family Court.

As directed by the Supreme Court of India in Malik Mazhar case, the government has allotted lands at Lamphelpat and Heingang for construction of a residential complex for judiciary officers, Biren said.

The state government will look into proposals pending for the creation of more posts of various grades both for the High Court as well as district courts for the efficient functioning of the courts, he added.