Is Manipur moving towards regaining its old ‘Sanaleibak’ status?

Manipur Chief Minister Biren Singh has given his assurance that the state would provide any form of assistance to talented entrepreneurs with innovative ideas as a step to make the state self-reliant. 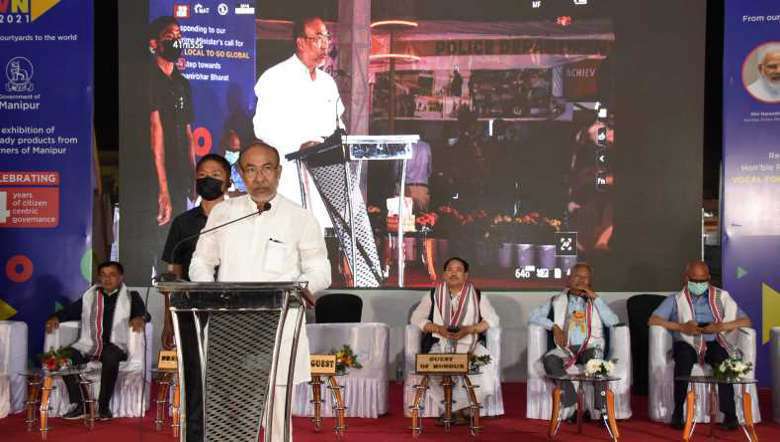 CM Biren delivering his speech at the closing ceremony of Mai-Own 2021 exhibition in Imphal, Manipur

Manipur today is battling the menace of drugs, facing acute water scarcity, erratic power supply, poor waste management and drainage system caused by unplanned urbanisation and deplorable road condition in most parts of the state, among several other issues. Chief Minister N Biren Singh, however, said on Monday that the state is moving on the path of development and returning to the long-lost glorious status of ‘Sanaleibak’ (The land of gold).

“The State has begun to revive to the status of once called ‘Sanaleibak’ where there was close bonding between the hill and the valley peoples with surplus products of our own,” Biren said at the closing ceremony of the seven-day-long exhibition Mai-Own 2021 that ended on Monday.

The exhibition, under the theme “From our courtyards to the World”, began on March 16 and showcased “world-ready products” from all corners of Manipur.

The chief minister said the exhibition was organised to provide exposure to the hidden talents of the youths of Manipur, who had been facing certain constraints in bringing up their innovative ideas and products.

Indeed, the state need innovative ideas to overcome the several issues the people of the state has been struggling with. Following it, the chief minister announced to provide assistance to entrepreneurs which could push the state to the old path of self-reliance.

Biren assured the gathering that the state would provide much-needed assistance to entrepreneurs coming up with our old and indigenous food products to substitute imports from outside the state.

Stating that production, value addition and marketing are important for sustaining a business, he assured that the state would provide any form of assistance to talented entrepreneurs with innovative ideas as a step to make the state self-reliant and self-sufficient under the Atmanirbhar Bharat Abhiyan.

Should the state wait and depend on Atmanirbhar Bharat Abhiyan scheme? Would that make the state truly self-reliant?

The chief minister also announced to provide assistance even to talented government employees so that they too could contribute more to the state’s economic development with their innovative products. He lauded the government department and its officials, organising committee and the participants of the Mai-Own 2021 for their contribution in successful organization of the exhibition.

What happens after the successful exhibition? The state has to watch and wait.

Urging the entrepreneurs to bring up their functional products in large numbers, Biren said they could be utilised throughout the state.

Hopefully, people with real talent are motivated and their work promoted for sustainable livelihood and development.

Deputy Chief Minister Y Joykumar also spoke at the occasion and said that Manipur and its people had been known for their culture, traditions and talents in many fields. The state, however, had not been able to showcase it due to less exposure, he said.

Pointing out that certain products of the state are in high demand from other states, Joykumar appealed to the entrepreneurs to put in more effort and produce their items in large quantities so that the products could be exported outside the states.

To produce items in large quantities would surely require more skilled labour and proper and adequate infrastructure. Could the poor or struggling entrepreneurs afford to push their innovative ideas in large scale?

In a first of its kind, the Mai-Own exhibition was held across the state, in all districts.

However, the state would be able to achieve self-reliance only when the government and concerned citizens take serious note of all that is plaguing the state and make great efforts to address the issues and bring development in real sense and not go on with rhetorics to cover up flaws and drawbacks.

Would the government please wake up