IFP Editorial: So much for the hype of ‘Har Ghar Jal’ project, Imphal city is now facing acute scarcity of potable drinking water. 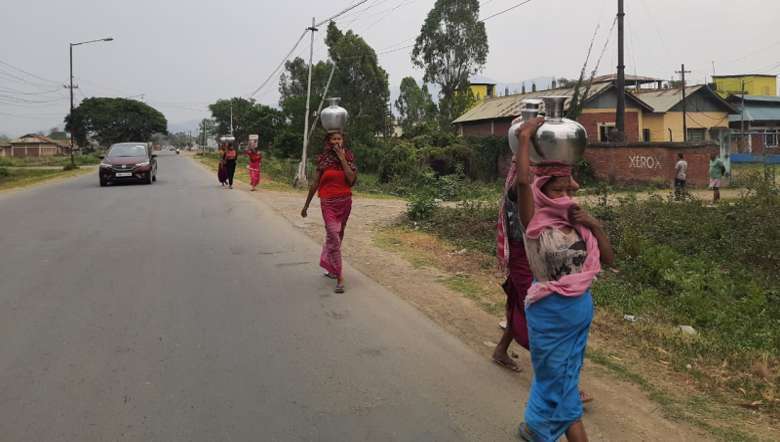 Last year in July, Prime Minister Narendra Modi laid the foundation stone for an Rs 3050 crore worth Manipur Water Supply project which would benefit large parts of the state. This year in January, a six member delegation from National Jal Jeevan Mission visited Manipur. Manipur has around 4.51 lakh rural households, out of which tap water supply is available to 1.67 lakh (37 per cent) households.

The state aims to provide 2 lakh Functional Household Tap Connections in 2020-21. The State has planned for 100 per cent tap water connections coverage by 2021-22 under Jal Jeevan Mission (JJM). Jal Jeevan Mission is a flagship program announced by Prime Minister in August, 2019, which aims to provide all rural households with tap water supply in adequate quantity &amp; of prescribed quality by 2024. Union Government is committed to providing all assistance to the State as provision of potable water is a top priority. Under the programme, funds are provided by Government of India based on the outputs in terms of tap water connections provided and the utilization of available central and matching State share. Centre has allocated Rs 131.80 Crore to Manipur in 2020-21.

So much for the hype of ‘Har Ghar Jal’ project, Imphal city is now facing acute scarcity of potable drinking water. Due to drastic reduction of water level at Singda Dam and drying up of Leimakhong River, which are main sources of raw water, the Public Health Engineering Department (PHED) has notified that normal supply of tap water to consumers will be highly affected. It said, the water treatment plants at Singda, Kangchup and Kangchup extension are unable to produce the optimum quantity of treated water. To a non-resident of Imphal, water scarcity would seem to be a recent phenomenon. But for the last three-four months, major portions of Imphal city has been facing water scarcity and have had to depend on private water tankers. In fact, private water supply has become a booming business for some. For those who could afford to buy 10,000 litre at Rs 7,000 and 1,700 litres at Rs 400, it is alright. But to the poor urban families, it has become a major burden.

Manipur experiences water scarcity due to lack of facilities to harvest rainwater and destruction of catchment areas, as per reports. Manipur has been receiving an annual rainfall of 1,467.5 mm, which is higher than the national average. The problem of water scarcity, however, persists due to lack of facilities for harvesting rainwater and destruction of catchment areas. There are also reports showing that 42 per cent of the natural springs in the hill areas of the state have vanished. Water covers 70 per cent of our planet, and it is easy to think that it will always be plentiful. However, freshwater, the stuff we drink, bathe in, irrigate our farm fields with, is incredibly rare. Only three per cent of the world’s water is fresh water, and two-thirds of that is tucked away in frozen glaciers or otherwise unavailable for our use. As a result, some 1.1 billion people worldwide lack access to water, and a total of 2.7 billion find water scarce for at least one month of the year. Many of the water systems that keep ecosystems thriving and feed a growing human population have become stressed. Rivers, lakes and aquifers are drying up or becoming too polluted to use. By 2025, two-thirds of the world’s population may face water shortages. And ecosystems around the world will suffer even more.

India is currently facing the biggest water crisis in its history. In fact, it is considered the centre of the global water crisis. The problem is so big, our lives, livelihoods, and futures hang in the balance. And no, it’s not a problem that can be easily resolved by water pumps, a purifier, and retail bottled water. NITI Aayog has described it as “the worst water crisis” in India’s history. In the context of Manipur, we need a state-specific comprehensive master-plan for water involving multiple departments so as to evolve an integrated strategy for rejuvenation of springs in the hills, afforestation of catchment areas of the major rivers, widespread rain-water harvesting schemes while regulating pumping of ground water.