The minister carried out an inspection of the periphery of Loktak Lake, Keibul Lamjao National Park, Sendra, ongoing projects at the vicinity and to examine the feasibility of upcoming projects in the near future. 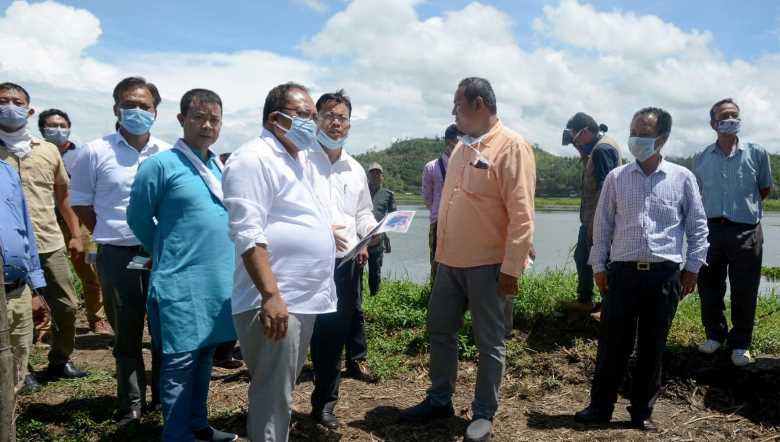 Forest, Environment and Climate Change Minister Awangbow Newmai on Tuesday called for active participation of the public in the conservation efforts undertaken by the government.

Newmai was speaking on the sidelines of inspection of the periphery of Loktak Lake, Keibul Lamjao National Park, Sendra, ongoing projects at the vicinity and to examine the feasibility of upcoming projects in the near future.

The minister said that the state is fortunate to have a water body like the Loktak Lake, which is the largest freshwater lake in the entire North East region.

Stating that people of Manipur have tremendously benefited from the Loktak Lake, he stressed on the need to save the lake with collective efforts. He said that the huts built on the phumdis (biomass) in the lake are polluting the lake.

“So, they have to be removed,” he stated, adding that Manipur’s future lies in the status of the Loktak Lake whether it is for developing tourism, livelihood for fishermen or other avenues.

Awangbow continued that killing of the endangered state animal, Sangai should be stopped immediately. “People should come forward to conserve it. The government alone cannot undertake the conservation efforts and needs the cooperation of the public,” he added.

The minister also stated that one need not always depend on the centre for help or assistance and opined that the people of Manipur can utilise the abundant resources the nature has provided to earn revenue without destroying it. He said that it is time for the public to come out and support the government and help it to plan for a better future.

He also lauded the cleaning works of the lake undertaken by Loktak Development Authority (LDA) and said that the works undertaken by the Manipur Pollution Control Board (MPCB) is also equally commendable.

LDA chairman, L Susindro said that a new act will be introduced in the near future to prohibit fishermen from using electric currents for fishing and the act will introduce stringent punishment for such unconventional methods of fishing.

Regarding the cleaning of phumdis, he said the cleaning process will begin full swing in the month of July with procurement of new machines. “Presently, 20 percent of cleaning of the lake is underway and cutting process of phumdis has started at Maibam Phumlok where phumdis are 14-15 foot in thickness,” he said informing that a proposal will be sent to the government to clean phumdis near Keibul Lamjao National Park either by flushing out or by gathering it near the park to increase/thicken the phumdis for the endangered Sangai.

Chairman, Manipur Pollution Control Board, L Radhakishore said that the objective of the visit is also to discuss the upcoming projects which can be undertaken this year following the COVID-19 protocol and following discipline.

Expressing apprehension that pollution will completely destroy the ecosystem in the lake, he also drew the attention of the minister to save the environment of the area.