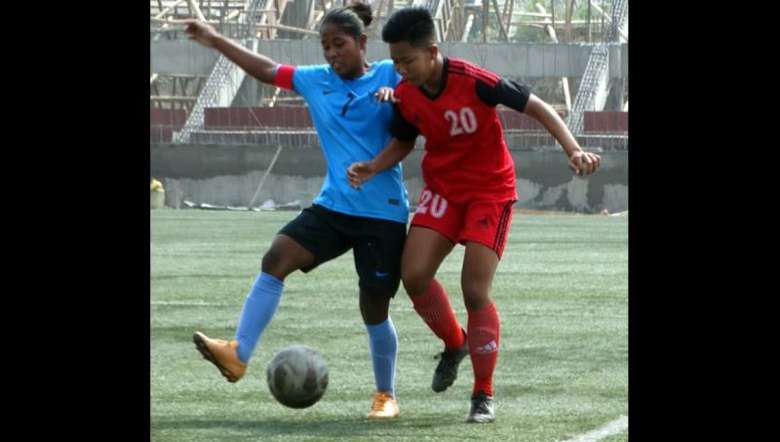 It was a smooth sailing for YWC Langthabal as they recorded their second straight win in the league while for ICSA Irengbam, they lost both their matches.

H Silky Devi opened the goal account for YWC Langthabal team in just 2 minute of play, catching the loopholes of its opponent. Dominating the game, YWC spitted fire when Ph Bina Devi scored the second goal in 6 minute and later S Lynda Kom brought up the third goal in 7 minute of play.

With ICSA Irengbam providing little resistance, L Babina Devi came up with the fourth goal in 17 minute. Resuming second half, The ICSA Irengbam team fared no better and seemed to surrender to their fate as they received more jolts when T Thoibisana Devi in the 41 minute and S Lynda Kom in the 53 minute fired home the winning goals, to collect full point. YWC Langthabal player, Remi Thokchom got a yellow card in the match.

In the second match, ESU Wangkhei Palace Compound upset Manipur Police Sports Club, Police HQ by 2-0 goals. The policewomen, despite getting the possession of the ball, never seemed to get their act right and little they could waste the chance.

On the other hand, ESU Eangkhei latched on to anything loose and got it right when I Prameshori Devi fired home the opening goal in the 12 minute of play for the lead. Making matters worse themselves, the Manipur Police Sports Club in frenzy melee, conceded a goal from A Romi Devi in the 37 minute, to give ESU the winning goal as the last minute failed to produce any more goals.

MPSC players, Ph Ashila and Th Keinakumari Devi received a yellow card each from referee N Bijen Singh. There will be no match on Monday.