Nahakpam Indrajit Singh said that the ancestors of Manipur had passed down their rich culture and traditions but the present generation is not doing enough for its care and protection. 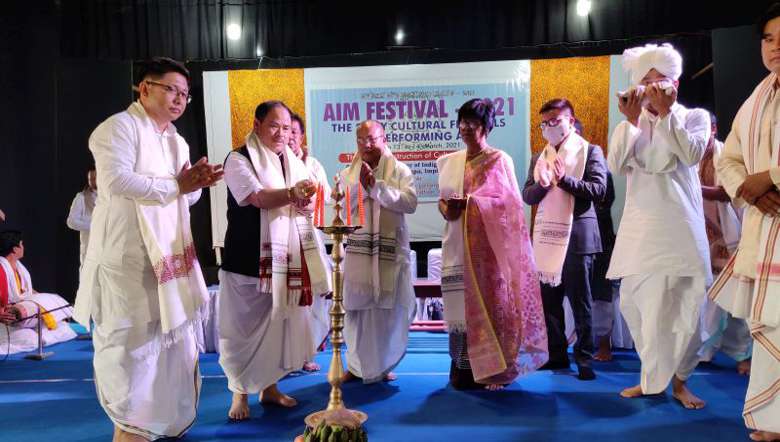 Kshetrigao MLA Nahakpam Indrajit Singh on Saturday expressed concerns on the degrading cultural heritage of Manipur and appealed to the people of the state to protect and maintain their rich culture and traditions with sincerity.

The MLA was speaking at the inaugural function of two-day long cultural festivals of performing arts, “AIM Festivals-2021” which was held at the auditorium of Huyen Lallong Manipur Thang-Ta Cultural Association, Irilbung.

The programme was organised by Academy of Indigenous Music (AIM) Bamon Kampu, Imphal East under the theme, ‘Reconstruction of Cultural Memory’.

Speaking at the function as chief guest, Nahakpam Indrajit Singh said that the ancestors of the state had passed down their rich culture and traditions but the present generation is not doing enough for its care and protection. This has resulted in the degradation and loss of various cultural practices, arts and traditions, he said.

As art, culture and tradition represent one’s identity, the present generation should start focusing on reviving and promoting them, he further said while adding that the present government is taking keen interest in safeguarding the age old cultural and moral traditions of the state.

Secretary of AIM I Shyamchand said that Manipur is known for its rich cultural heritage. But in due course of time, many art and cultural forms are gradually dying out, he said. To preserve and revive them, the academy is putting efforts to impart knowledge and organising cultural festivals and programmes from time to time.