The Question for Humanity: Where are we heading?

The world at present is now keeping their heads and eyes towards Myanmar- what will happened next and what will be the consequences coming out from this obscured scenario. 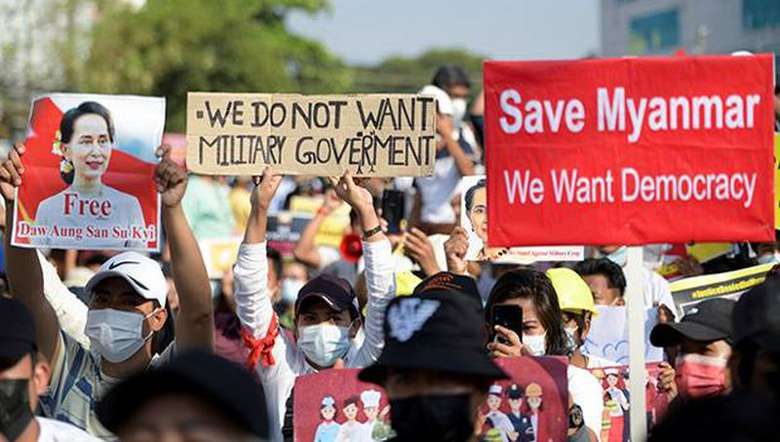 “Save Myanmar from military coup”, is one such driving slogan or hashtag trending on social medias and various social platforms around the globe in the present day scenarios, whose waves could be felt by all who hears the inhumane  story which took place RIGHT NOW in the present day country of Myanmar, also known as Burma, with a population of about 54 million  located in the South East Asia with more than 100 ethnic groups, bordering India, Bangladesh, China, Laos and Thailand with  Nay Pyi Taw as its capital city and Yangon (formerly Rangoon) as its country largest city.

What’s really happening and why are the masses protesting?

Mass protests have been taking place across Myanmar since the military seized complete control on 1 February, last month. Elected leader Aung San Suu Kyi and members of the National League of Democracy (NLD) party are among hundreds of people detained.

With the military back in power, it has already declared a year-long state of emergency. The armed forces had backed the opposition, who were demanding a rerun of the vote, claiming widespread fraud. Howbeit the election commission said there was no evidence to support these claims. Could they be transparent about it? Can we blindly believed despite the dictatorship-like rule in the country? Is it not obvious for the authority to have been fabricated the issues (results) when they are being summoned to do so? Such is the prevailing situations happening right now in Myanmar.

The power in the country is now taken over by or under the in charge of Military Commander-in –Chief Min Aung Hlaing. He has long wielded significant political influence, successfully maintaining the power of the Tatmadaw-Myanmar’s military, even as the country moved towards democracy. He has received international condemnation and sanctions for his alleged role in the military’s attack on ethnic minorities.

As a result of this, the people have been protesting since the past many days, which despite of bringing out peaceful conclusion is seen to get worsen each day with increasing number of deaths sacrificing their lives fighting for the freedom of their country- freedom from MILITARY DICTATORSHIP and the fight for DEMOCRACY where free and fair elections could be held and where the masses have their rights to raise their voices despite being silenced by any form of power. A total of 38 deaths ( in just one day) caused by the Myanmar military has been reported as on  March 3 of this month. Many innocent lives had been already lost and hundreds of thousand people are protesting day and night-spending their nights on the road without food and water; starving  for many days with the sole  hope to get a better Myanmar tomorrow! People are holding  postcards and slogans,“ #Save Myanmar, # Restore people’s right in Myanmar, # Say NO to coup and crime, #Justice for Myanmar”, and what not!

One such incident of sacrificed seen in the recent report, who melt  the hearts of thousands and re-ignite the sense of bravery and sacrifice for one’s country-an act of true patriotism was a 19 year old, Man Kyal Sin from Mandalay, a city in Myanmar who was shot dead on her head during the protest against the military. She had foreseen her fate on that fateful day that she told her father for authorizing her organs for donation, in case she  breathe her last, with her blood group type worn around her neck. On her T-shirt was written a heart-melting and comforting message for humanity which says, “EVERYTHING WILL BE OK”. The sacrificed made by such patriotic being reminisces us of the bygone patriotic leaders who had lay down their lives for the sake of their country. She stole away not only the hearts of thousands but also the internet because of her bravery and sacrificed who is now an inspiration and an example of patriotism for millions of youths like her.

The question for humanity!

The world at present is now keeping their heads and eyes towards Myanmar- what will happened next and what will be the consequences coming out from this obscured scenario. What is even more confusing is the possibility of such incidents to happen in this era- in this fast competitive and advancing era with the introduction and presence of so much peace-making organizations and agreements being made, governing bodies and law enforcing institutions between various countries.
Where is the question for HUMANITY? Hundreds and thousands of innocent lives are being taken time and again for the hunger of HUMANITY; for the fight of an unbiased and transparent DEMOCRACY; for the desire  of EQUALITY among all, irrespective of genders, caste, creed, religions and various social distinctions; for the hope of a PEACEFUL and a BETTER world we could all live in; for the thirst of LOVE among all mankind and humanity.

Let us all stay strong and pray for Myanmar to resolve all kinds of hatred and inhumane acts and  political conflicts and come out with a peaceful conclusive conclusion and continue the fight for humanity as long as ears can hear and eyes can see.