The 9th friendly football match under the Ghar Ghar Niranjan initiative between AMGSU Central Committee and AMGSU Moreh was also organised during the tour. 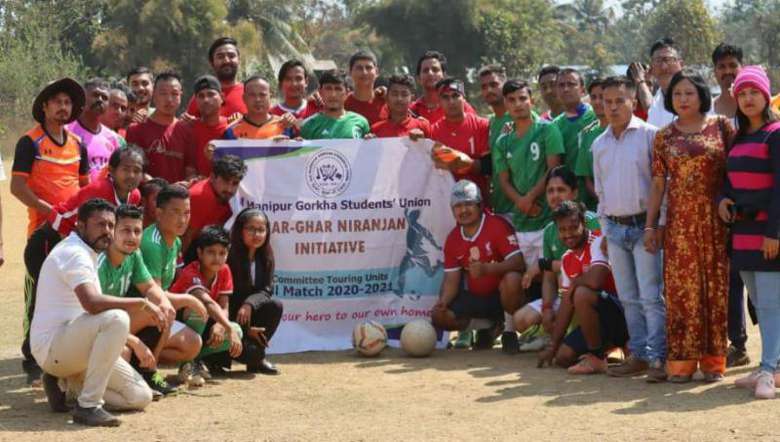 The All Manipur Gorkha Students' Union (AMGSU) under its Ghar Ghar Niranjan initiative toured to border town Moreh on Tuesday to spread awareness on the rich culture and history of Gorkhas of Manipur.

The 9th friendly football match under the Ghar Ghar Niranjan initiative between AMGSU Central Committee and AMGSU Moreh was also organised during the tour at Eastern Shine School Ground at Moreh.

The friendly match was won by AMGSU Central Committee by 4-0 where LB Adhikari, Rajen Thapa, Indra Bahadur Chhetri and Puran Katwal scored one goal each against the AMGSU Moreh unit team. The players and spectators were also involved in cleaning the premises of the ground before and after the football match.

After the football match, prize distribution ceremony of the 3rd Gorkha Premier League (Cricket) was jointly organised by Moreh Gorkha Samaj, Moreh Gorkha Youth Club and AMGSU Moreh unit at Gorkha community hall, Moreh Nepali Basti. Prizes of the competitions that were organised on the day of Saraswati Puja were also distributed during the occasion.

Tunia Verma Cricket Team defeated Raghav Cricket Team by 8 wickets in the final match of the 3rd Gorkha Premier League (Cricket) where five teams participated in the event which was held from February 17 to February 22.

The Gorkha students' union will continue touring other AMGSU units to spread the rich culture and history of the Gorkhas in the state.