Over 200 motorcyclists took part in the motorcycle rally. 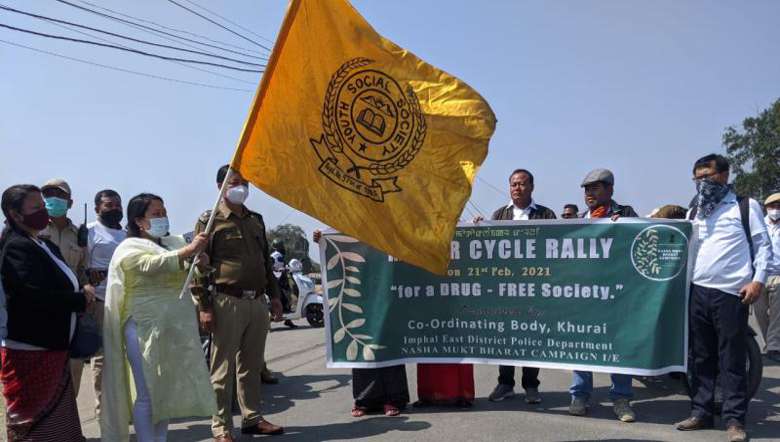 Over 200 motorcyclists consisting of police personnel and public on Sunday took out a motorcycle rally across different areas in Imphal East district, campaigning for a drug-free society.

Speaking on the sidelines of the occasion, the DC said that Nasha Mukt Bharat Campaign has been started in Imphal East as the district is also among the 262 districts declared as vulnerable to drugs menace by the centre.

The rally aims at spreading awareness about the menace of drugs on society in order to achieve a drug-free society. A function was also observed after the rally at Khurai Puthiba Leikai community hall.

Imphal East SP Jogeshchandra Haobijam, while speaking as the chief guest of the function, sought cooperation from the public in the war on drugs campaign of the government.

He stated that the drugs and alcoholism scenario in the state is getting worse that there are even home delivery services being provided nowadays. Besides, even among police personnel there are few who are irresponsible and conniving, he said and appealed to the people to give information of such police personnel so that they may be weeded out at the earliest.

The SP also appreciated the efforts of local bodies which inform the police in a timely manner, leading to the arrest of drug peddlers and seizing alcohol among others.

He exhorted the people to continue supporting the war on drugs and bring about a drug free society in the near future.