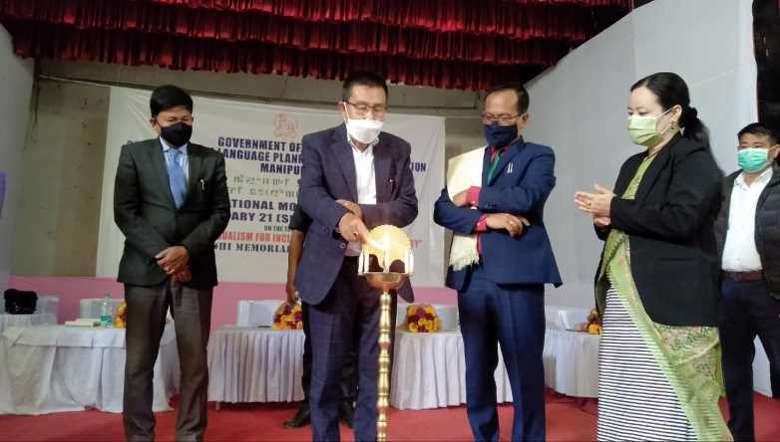 The Manipur government has taken up the initiative for amending Manipur Official Language Act, 1979, on the occasion of the International Mother Language Day 2021,  in a bid to replace Bengali script with Meetei Mayek as the official script of the state within 10 years' time.

State Education Minister Sorokhaibam Rajen made the announcement during the observation of the International Mother Language Day at GM Hall in Imphal on Sunday, organized by the Directorate of Language Planning and Implementation, Manipur.

Rajen said that International Mother Language Day was observed to promote linguistic and cultural diversity and multilingualism of the state. The language which has learned from birth should be promoted; no one should feel ashamed of speaking in one's language.

"The culture-tradition and language are your identities... Agitations for including Meetei Mayek on eight schedules was the best step to promote the language,” he said.

Rajen said the Manipur language included in the Eighth Schedules through Manipur Official Language Act, 1979 can be used to give any competitive exam but the script is in Bengali script.

Since 2006, Meetei Mayek script began to be taught in schools from class 1 and now it extended to the higher class. Within 10 years, all Bengali script will be changed to Meetei Mayek, he said.

Speaking English or Hindi may be good for communication with an outsider who does not know Manipuri. But It is better to speak our own language to preserve our culture and traditions, he said.

"Due to borrowing others' culture or tradition or language, the discipline embedded in our language has been forgotten and many unfortunate incidents are happening," he added.

Pointing out that the Centre has extended Hindi language to non-Hindi speaking states and as many as 454 teachers have been sent to the education department to teach Hindi, he said the state government has sent the proposal for the appointment of over 800 teachers of Meetei Mayek.

"People who left Manipur for Bangladesh, Tripura or in another state should preserve our culture. Meeting them in a month or in a year will not be able to preserve or promote our culture and tradition," Rajen said.