Dolaithabi Barrage Project to be completed by March: Letpao Haokip

Letpao said that to construct the right main canal, compensation for 243 people amounting to Rs 8,29,22,000 was deposited to DC Imphal East. 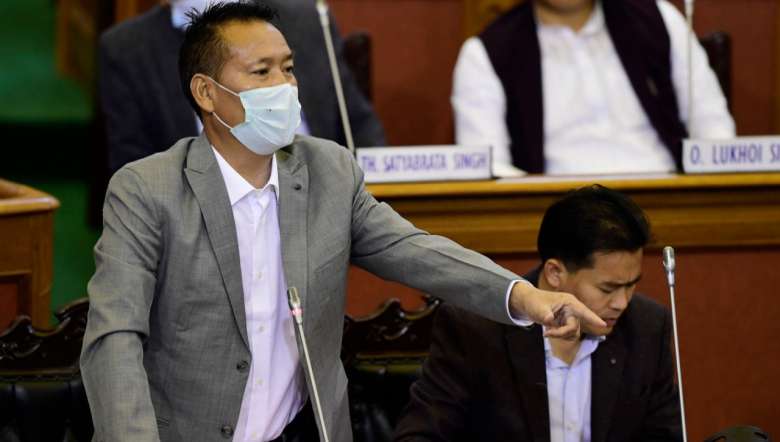 The minister was replying to a question raised by MLA, Th Lokeshwar Singh in the ongoing 12th session of the 11th Manipur Legislative Assembly in Imphal on Thursday.

Letpao said that the project was one of the flag projects of the present government and proceeds to work with some targets. In view of this, it was inaugurated even if some parts are yet to complete its construction.

Letpao said that to construct the right main canal, compensation for 243 people amounting to Rs 8,29,22,000 was deposited to DC Imphal East. Out of it, 229 land owners had taken the compensation and the rest 14 people with a total value of Rs 53.04 lakh are yet to accept. This is one major reason for not being able to carry forward the project. As such, it would be grateful if the concerned MLA appeases them to accept the compensation amount.

Responding to the query of MLA Surjakumar Okram, minister of Finance, Yumnam Joykumar stated that the state had increased the Value Added Tax (VAT) on petroleum products thrice since 2017. The notification on changing of VAT rate for petrol and diesel were issued on October 4, 2018 in which petrol was reduced from 25 per cent to 21.2 percent and diesel rate was declined to 10.6 per cent from 14.5 per cent.

He also clarified that out of three times notification on changing of VAT rate issued since 2017, the mandatory provision of day’s public notice was served only in the second notification.  But in the first and last notifications, such mandatory 14 days public notice rule was not followed due to certain reasons.

During the first notification, the government decided to transfer the benefit of tax rate decrease in petrol and diesel immediately to the consumer. In the case of last notification, due to urgent need for additional resources to meet the expenses related to the COVID-19 pandemic. On top of this, there was a sharp decline in both GST and VAT collection in various other items, he added.

Minister of Rural Development and Panchayati Raj, Thongam Biswajit said that under Pradhan Mantri Awaas Yojana-Gramin (PMAY-G), 18,640 houses was allotted for financial year (FY) 2019 to 2020, based on socio-economic caste census 2011. Of it, 18,455 units had started construction and 10,030 were completed.

He stated this while replying to the question raised by MLA, N Loken Singh. He further said that another 15,842 houses have been allotted for FY 2020-2021. Out of it, 13,861 have been sanctioned till date. Funds for above houses are yet to be released by the ministry of Rural Development.

When asked whether the state could achieve the said target by 2022 as the government of India targeted to provide houses to all under this scheme by 2022, he said that the main problem is that less number of people are registering to avail the scheme than the allotted number. However the government is also identifying people who can enjoy the scheme.