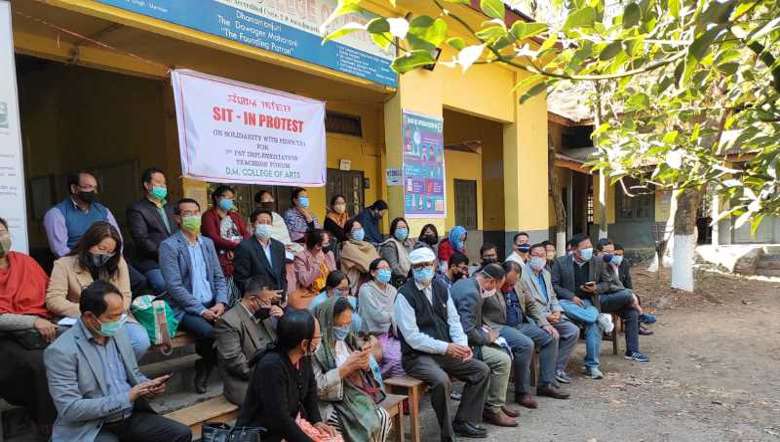 The All Manipur College Teachers’ Association (AMCTA) on Tuesday resolved to begin cease-work strike from February 22 onwards, condemning the state government for not fulfilling the demand to implement UGC 7th Pay recommendations.

The association has been demanding the implementation of UGC 7th Pay recommendations since July 30, 2019, president M Lokendro Singh said while speaking to the media during a press conference held at Manipur Press Club.

The demand was also discussed in cabinet meeting and even approved in-principle on August 6, 2020. But the state government has not acted for its implementation till date, he said.

He further said that not implementing 7th Pay Commission even after six months of their in-principle approval is highly condemnable. When most of the state government employees are enjoying their 7th pay scales, the teachers’ community has been left betrayed, he said.

The association has run out of patience and resolved to take various agitations, he added.

The association has resolved to begin mass mobilisation from February 16, he said. The cease work strike will be launched from February 22 if the state government fails to fulfill the demand by February 20, he added.

Meanwhile, demanding implementation of 7th Pay and Regulation, 2018, the government college teachers of the state continue to stage sit-in protests for the 10th day in different colleges across the state under the banner of Federation of Government College Teachers’ Association, Manipur (FEGOCTA).

Failure to issue the order of the 7th Pay after approval by the state cabinet and assurance given by the state government is a discriminate against the college teachers, a release issued by the general secretary of FEGOCTA N Somorendro stated.

It stated that until and unless the order of implementing the 7th pay scale is passed, FEGOCTA will stick to announcement of taking up mass casual leaves on February 12 and 13 and boycott classes from February 17.

In reply to a calling attention motion raised during today's Assembly sitting regarding the report of threat to boycott classes by FEGOCTA, state Education Minister S Rajen said that the demanded pay scale will be implemented once the Education department gets the executive order from the Finance department.