As the TRAU regulars are currently doing their duty in Hero I-League, the inexperienced TRAU youngsters had a tough time, finding their footing right against Sainik FC team 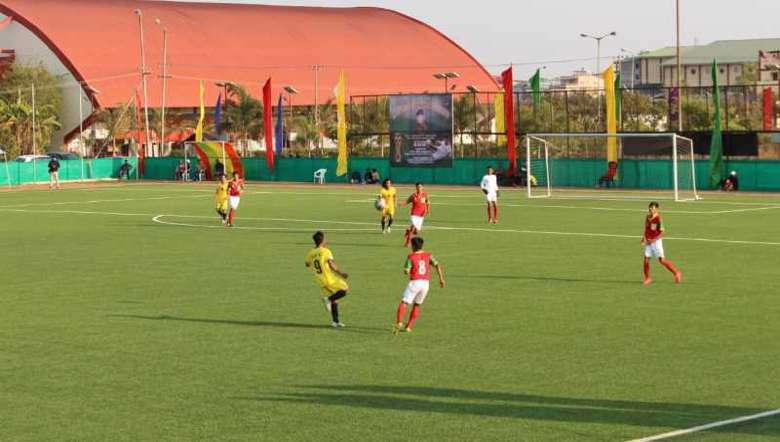 As the TRAU regulars are currently doing their duty in Hero I-League, the inexperienced TRAU youngsters had a tough time, finding their footing right against Sainik FC team, who presented a balanced look in their approach.

Chinglemba opened the account for Sainik FC team in the 13th minute of play and went on to add his second goal in the 34th minute as well, to show his scoring prowess. Making life much harder for the TRAU team, Naocha found his footing right to strike Sainik FC another goal in the 15th minute to dominate the proceedings.

Later in the second half, Sainik FC continued to enjoy the upper hand and with little or no resistance from its opponent, scored the team’s fourth goal in the 70th minute for the victory today. TRAU player Th Naresh received two yellow cards and was given the marching order from the field by referee Ch.Shyamson Singh in the 69th minute of play.

In the other matches of the day, KYVO Kwasiphai Bishnupur upset AMOFA Moirang by 3-0 goals. KYVO team lead the first with a solitary goal from W Dingku in the 39th minute of play and later on in the second half, W Zimik in the 66th minute and K Jeanbilung came up with the winning goal in the 81 minute, to claim 3 points for the victory.

AMOFA player O Roshan Singh and KYVO player Chingkhunganba got a yellow card in the match.

Classic Football Academy, Imphal East also took their first win, beating Hiyai Academy, Luwangsangbam by 2-1 goals. The first failed to produce any goal but in the second half, Classic unfurled their wings with N Bidyananda getting the opening goal in the 48th minute and teammates Ch Paogilen Mate consolidated in the 69th minute. Hiyai team’s lone goal was fetched by Jotin in the 77th minute of the play.