Fisheries minister said he will soon carry out inspections under the state government in different districts. 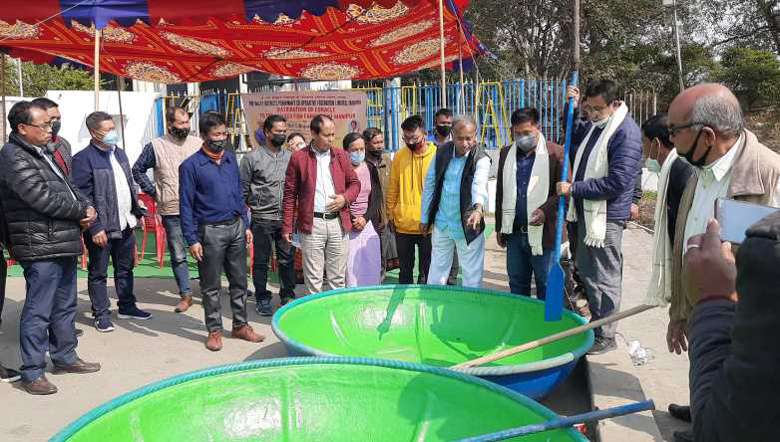 Manipur Fisheries Minister Soroikhaibam Rajen Singh on Sunday said he will soon carry out inspections under the state government in different districts to make sure that there are no encroachments on fishery areas.

The minister was speaking at the distribution of fibre coracles (small, lightweight and oval shaped boats) to selected fish farmers at western gate of Kangla, Imphal on Sunday.

Under the Pradhan Mantri Matsya Sampada Yojana initiated by the Centre, the state government will make sure that beneficiaries directly receive their benefits, Rajen said.

The state has sent a proposal of Rs 14 crore while an amount of Rs 7 crore has been sanctioned, he added.

Rajen further said that the Fishery department will not be able to provide sufficient fish to meet the demands of the state. However, the department can extend help to the fish farmers to increase the production and to preserve the indigenous fish species of the state, the minister said.

The Fishery department has plans to lease out lands for three years to fish farmers who are interested in fishery but without a land of their own, he added.

Rajen said the traditional wooden boats are heavy and there are high chances that they will sink due to different problems which put the fishermen's lives at risk. However, the fiber coracle which is lighter than the wooden boat has less chance of sinking and it also has a capacity of carrying 400 to 500 kilograms of weight, he said.

Locals and tourists can also use the coracles at amusement parks and other recreational purposes in water bodies, he added.

He said though fiber coracles cost around 15,000 to 17, 000 in Maharashtra, the price may increase when it is sold in the state owing to the transportation charges. As such, the Fishery department, cooperative farmers of valley districts along with the state government will chalk out means to provide the boats at a subsidized rate to fish farmers, the minister said.

When asked whether the fishermen in Manipur can adapt to the circular size of coracles, Madegowda said following the traditional method is good; however, adapting to the changes in technology is a must.

He further said that the fiber coracle will last at least 15 years or more depending upon how the fishermen use them.