Manipur and Nagaland Sector CRPF have been organising the tournament since 2010 in the memory of Manoranjan from Yurembam Makha Leikai, Imphal, Manipur. 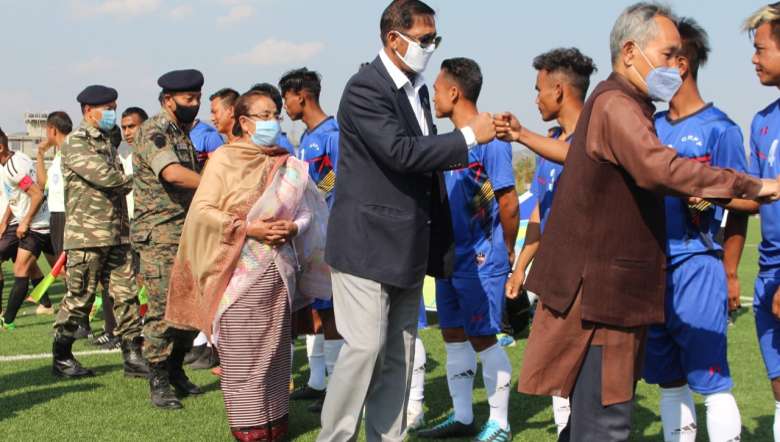 Joykumar in his speech praised the CRPF for organising the tournament in the memory of the martyr, it stated. He also urged the local youth to come forward and become responsible citizens, it added.

Joykumar offered tributes to the Late Manoranjan and presented a shawl to Ng Memcha, the mother of Manoranjan, the release stated.

It stated that the opening ceremony was also attended by senior police officers, senior officers of CRPF, Indian boxer Laishram Sarita Devi, padma shri and arjuna awardee (Football) Oinam Bembem Devi. Manipur and Nagaland Sector CRPF have been organising the tournament since 2010 in the memory of Manoranjan from Yurembam Makha Leikai, Imphal, Manipur.

Manoranjan was the only son of Late Ng Budhachandra and Ng Memcha who sacrificed his life while fighting the Naxalites in 2009 at Chhattisgarh, the release added.

It stated that 28 top teams of Manipur are participating in the tournament. The opening match of the tournament was played between MUVANLAI, Sadar Hills of Kangpokpi district and Sports Club GC CRPF Imphal, it added.

Shaheed Manoranjan Football Tournament to be held till February 27