The Naga National Council (NNC) president urged the young generation to know their history and embrace their heritage. 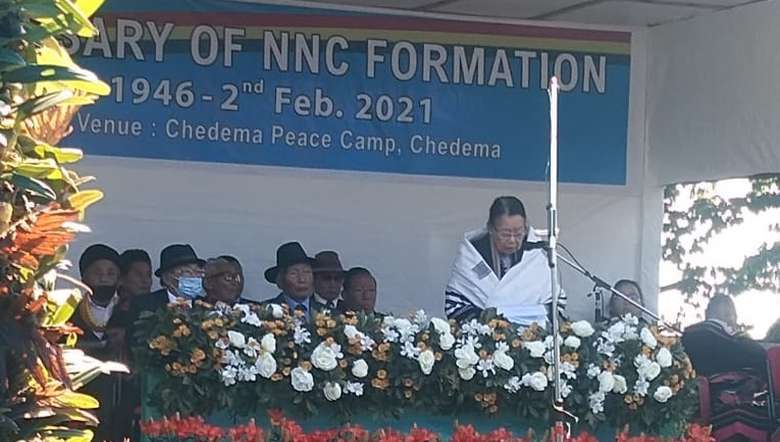 Naga National Council (NNC) president Adinno Phizo urged the young generation to never forget the sacrifices made by their forebears and urged them to know their history and embrace their heritage.

Speaking on the 75th Anniversary of NNC Formation Day on Tuesday at Chedema Peace Camp near Kohima, Adinno Phizo said that all the Nagas are NNC members and every new born Naga child becomes a NNC member from birth.

The NNC president said that the Nagas should be thankful and proud that the Naga nation is growing stronger with the passage of time in spite of many set- backs.

“Let us keep our old culture of honesty by earning our bread with the pure sweat of our brows. This will earn us the respect of others and also God’s favor which can become the basis of our future,” Adinno Phizo said.

“Wherever you go, be an ambassador for your nation, whatever you do, do it with utmost sincerity. Respect your culture and never forget your mother tongue. Fear God and always seek His counsel from Him. Stay away from gifts that you have not earned and always be aware of divisive plans to our country,” she added.

The NNC president said that Naga National Council formation day was established by “our visionary leaders” at Wokha in Lotha region on February 2, 1946.

Paying tribute to the "patriots” who sacrificed "everything they had in defense of the country” Adinno said that against all odds and confusion at the time of the withdrawal of the British imperial rule, the Naga National Council formally declared the Naga Independence on August 14, 1947 while “certain territory of our land were still under the then British administration”.

She also said that India was granted her Independence on August 15, 1947, a day after NNC's declaration of Naga Independence. “Our declaration of Independence was again ratified by our Naga National Council Plebiscite of May 16, 1951 conducted by NNC led by AZ Phizo with the result of 99.9 per cent,” she added.

Adinno continued that the Government of India was informed ahead to openly witness the Plebiscite, and so there were Indian observers too. But India again brought ballot boxes to the then Naga Hills for voting in 1952, in the first Indian general election after her independence. However, true to our national Plebiscite of 1951, the Nagas maintained a firm national stand of total non-participation and not a single vote was cast. According to Adinno Phizo, it is in the record.

The NNC president said that even while “some of us were under the British rule, our people sensed that the British would be going one day from this part of the world”.

“So, with this concern for the future, 20 Nagas representing all the Nagas, submitted a memorandum to the Simon Commission in 1929 that the Nagas should be left as they were before the British came. Therefore, the whole Naga Hills were left as an Excluded Area by the House of Commons by the Government of India Act of 1935”, she added.

According to Adinno, the Indo-Naga problem started when the Government of India sent "her Army" to the Tuensang area in 1954 by ignoring the above cited historical facts of Nagaland not being part of India.

Adinno then said that in the last 75 years as a nation, “our people” faced different challenges by experiencing pain, untold suffering and sadness in the hands of “our enemy”.

“Today, there are groups thriving on lies and deceit, depriving our Naga society of our culture of independence," she added.

Adinno Phizo said she believes the dawn of great challenges and opportunities is fast approaching. “Though it will not be roses all the way, it will bring countless opportunities and hardships as well”, she said. “It will depend on our people how to face the great challenges with the right response and fortitude,” she added.