Protest against hike in prices of petrol, diesel, cooking gas in Manipur

The BJP government has raised the fuel prices adding hardship to the people who have been suffering enough during the pandemic, NSUI Manipur state convenor Bankimchandra Meitei said. 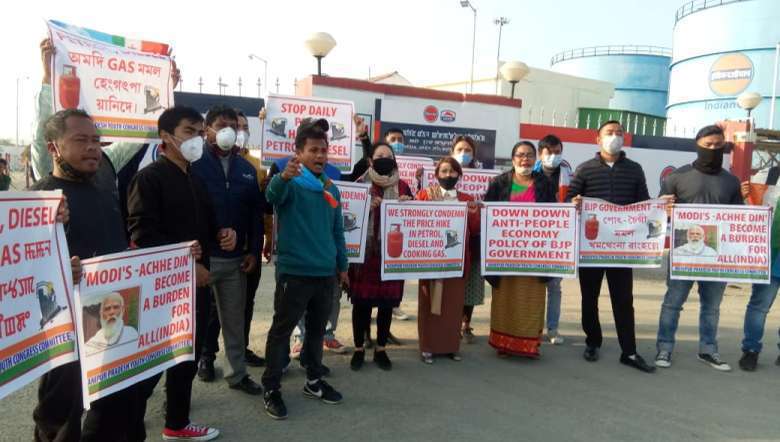 A protest was staged in front of Malom Oil Depot against the soaring price of petrol, diesel and cooking gas by members of Manipur Pradesh Youth Congress, National Students Union of India (NSUI), Manipur State, Congress Seva Dal on Monday.

The protesters hold placards that read, ‘Modi’s ache din has become a burden for all’, ‘down down anti people economy policy of BJP government’, ‘stop daily price hike on petrol and diesel’.

Educational institutions have been opened in the state but many students are struggling to pay the transportation charges which increased due to exorbitant fuel prices, said NSUI Manipur state convenor Bankimchandra Meitei while speaking to the media during the protest.

Taking advantage of the pandemic, the BJP government has raised the fuel prices adding hardship to the people who have been suffering enough during the pandemic, he said.

Mentioning that the price of petrol and diesel in other underdeveloped countries are much lower than in India, he questioned why the prices have been increased in the country.

Bankim further demanded that the BJP government at the Centre and the state should reduce the price of petrol, diesel, gas and warned of intense agitations in the future.