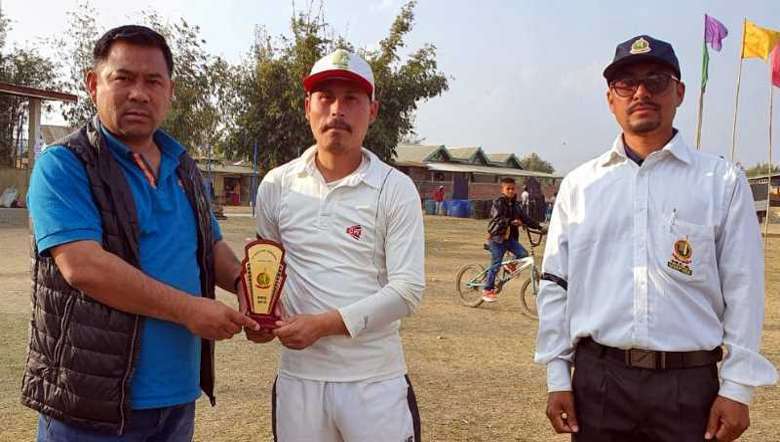 MNCA Secretary S.Priyananda handing over the Man of the Match trophy to PSC player Y.Bhomendro at Moijing Playground, Thoubal.

SSU batsman started their innings with skipper Deepanear making an effort to strike 57 runs from 73 balls while Rohit made 42 runs from 46 balls and Gugu struck 30 runs from 20 balls, to post 195 runs for 10 wickets from 39.2 overs. Demin with 14 runs and Saikhomba with 12 runs are the other run contributors.

PSC in their reply reached the target in 35.3 overs for 6 wickets with wicketkeeper Daimond topscoring with 43 runs from 40 balls while Bhomendro fetched 38 runs from 46 balls. Homenjit made 26 runs while Kenny got 28 runs for the victory.

SSU bowler Pyarlal claimed 4 wickets while Douglas and Demin took 1 wicket each. Y Bhomedro was adjudged Man of the Match for his 38 runs and 2 wickets haul.

KASC made 100 runs for 10 wickets from 27.3 over after winning the toss. Sahir made 22 runs while Priyobrata got 16 runs among the top run contributors.

RCA bowler Zamir Khan, Wasim Akram picked up 3 wickets each while Illiyas Khan got 1 wicket. In their reply, RCA batsman Alfash was the only one who crossed double figure number making 16 runs and conceded defeat, managing 85 runs for 10 wickets from 22.1 overs.

KASC bowler Babu Khan grabbed 4 wickets while Farijuddin, Anjum and Chingkheinganba picked up 2 wickets each. Babu Khan got the Man of the Match award.

IBSA pulled off a 7 wicket victory over UCC Uripok played at Langthabal Public Ground. UCC batsman took to the crease and made 130 runs for 10 wickets from 28.2 overs. Diamond scored 19 runs while Ajit got 13 runs, Shyam, Thomson and Furkan all made 12 runs each.

IBSA bowler Bablu claimed 3 wickets and was later given the Man of the Match award while Gopal, Delbaksh got 2 wickets each and Nelson got 1 wicket.

IBSA batsman Robinson cracked 58 runs while Rajababu remained unbeaten with 34 runs to reach the target in 26 overs for the loss of 3 wickets. UCC bowler Genish and Satish took 1 wicket each.