An own goal by Elvedin Skrijeli and a 69th minute Bidyashaga Singh strike handed TRAU a much-deserved win. 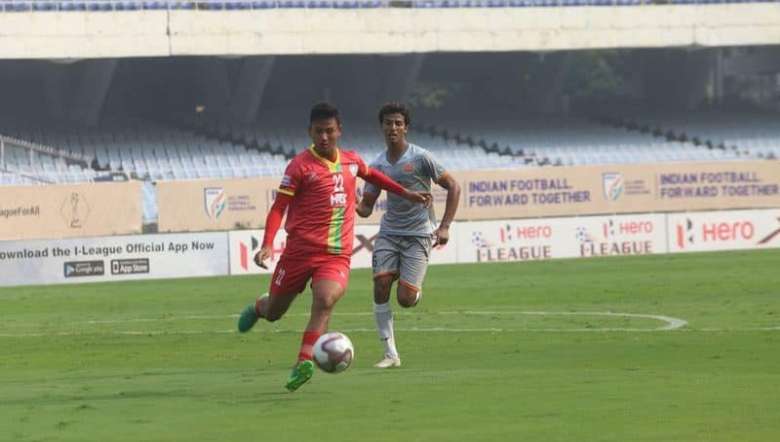 After three back-to-back draws, a clinical performance by Tiddim Road Athletic Union (TRAU) saw the Manipur based club grabbed their first win of the Hero I-League season after defeating Chennai City FC 2-0 at the VYBK Stadium in Kolkata, West Bengal on Sunday.

An own goal by Elvedin Skrijeli and a 69th minute Bidyashaga Singh strike handed TRAU a much-deserved win, in a match that was largely dominated by the Nandakumar-coached side.

TRAU certainly did not hold back from the starting minute of the match and adopted a high pressing style, restricting Chennai City FC into their own half and forcing them to play out from the back. In the 4th minute, a loose ball fell to Bidyashagar Singh, who could have taken a touch and gone into the box, but the forward tried the spectacular, a volley from outside the box which went way over the goal.

The Manipur-based outfit had a spring in their step in attack and maintained pressure on their opponents. On the 20th minute, midfielder Kishan Singh went on a blistering run, slicing through the opposition defence, before releasing a through ball to Kumron Tursunov. The Tajik import was, however, ruled offside.

Chennai City looked to brush things up and made a substitution shortly after when coach Satyasagara opted to replace Hari Krishna for Vladimir Molerovic. It had little effect on TRAU’s momentum. Perhaps the best opportunity of the half fell to Bidyashagar in the 34th minute when he failed to find the net from inside the box, with only the opposition custodian to beat. His shot ricocheted off the opposition custodian and fell to Shahbaz, who shot wide of the target from distance.

Chennai City could have taken the lead, much against the run of play, in the 43rd minute when midfielder Elvedin Skrijelj’s thumping header off a corner kick went inches over the bar. Despite all their possessions and chances, TRAU had little to show for as both teams went into the tunnel without a goal.

The breakthrough came four minutes into the second half for TRAU when forward Joseph Olaleye ran onto the right flank after spinning past his marker. The quick forward unleashed a venomous shot that rattled against the thigh of Elvedin and went into the back of the net to hand TRAU the lead.

Frustration built up for Chennai City FC as chances came rare and all of their attacks were being easily displaced by the TRAU defence. With TRAU’s attacking duo of Olaleye and Bidyashagar giving problems to the Chennai City defence, the Manipur-based club closed in to double their lead. In the 69th minute, a brilliant build-up play between Olaleye and Bidyashagar saw the latter clear onto goal. From close range, Bidyashagar slotted the ball into the left corner as TRAU doubled their lead.

Chennai City’s captain Charles Anandraj was sent off with a little over a quarter of an hour left, after receiving a second yellow card, to add more to Chennai’s worries. In their Yester matches, TRAU had taken the lead but had still failed to get the win. This time was different as the side showed defensive maturity and experience to thwart the opposition attacks.

Playing with a level head and composure, TRAU sat back and soaked up the pressure, while playing on the counter. And despite all the valiant effort of Chennai City, TRAU held onto their two-goal lead as the full-time scoreline read 2-0 in their favour.