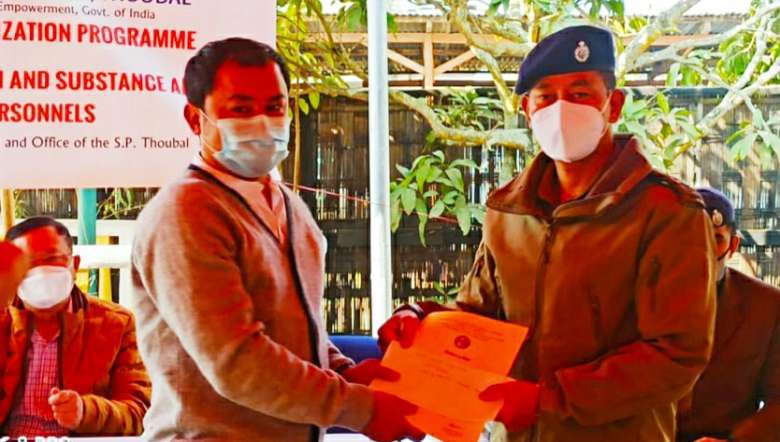 Will power and good advice with proper guidance at the right time can save the youths from any form of substance abuse, Thoubal  Superintendent of Police Sarangthem lbomcha said at an awareness programme in Thoubal Tuesday.

The SP was speaking at an awareness-cum-sensitization programme on "Prevention of Alcoholism and Substance Abuse" specially designed for police personnel in Thoubal. The programme was organised by the district Nasha Mukt Bharat Campaign Committee.

Sharing his testimony on his real life experience on how he refrained from peer pressures to take alcohol, lbomcha appreciated the Nasha Mukt Bharat Campaign Committee for sensitizing the police officials and appealed to spread the message at outposts and to all the local areas.

Additional SP ( LO) Lakshya Sharma explained the major points of the Narcotic Drugs and Psychotropic Substances Act,1985 to the police personnel present in the sensitization programme.

Meanwhile, Thoubal DSWO A Kameshwar expressed that coordination and collective efforts of every stakeholders are key to make the district drug-free and appealed to the police department to provide reports of drug-related activities carried out in the district.

The DSWO also proposed the police department to open an adult friendly-centre where young adults can be given counselling about the various anti-social activities, especially drugs.

Padmashree Dr A Jayanta Kumar said that prevention at the early stage is the only way to save youths from falling into the pool of drugs.

While appreciating the programme as a good sign, Kumar said that arrested drug addicts are sent for treatment rather than giving corporal punishments.

Kumar further expressed the need to communicate and build a network among the police and NGO'S in curbing the drug situation in the district.

As a part of the programme, prizes for a three-minute video film contest on Nasha mukt Bharat Campaign were distributed. A signature campaign and street play was aiso organised in connection with the event.