Komron Tursunov made history by scoring the fastest goal ever of the Hero I-League in the 9th second. 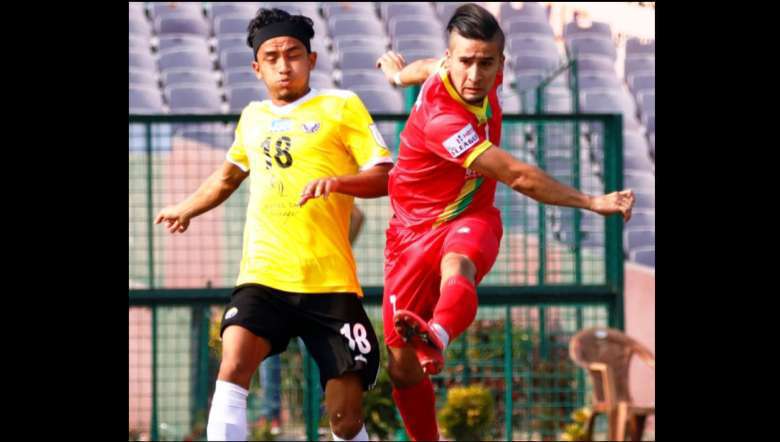 TRAU’s Tajik recruit Komron Tursunov made history by scoring the fastest goal ever of the Hero I-League in the 9th second, beating Katsumi Yusa’s 13th-second goal against Churchill Brothers in the 2018-19 season. The Tajik International’s strike, however, was cancelled out by Mason Robertson’s 70th-minute header as TRAU played out a 1-1 draw against Real Kashmir FC at the Mohun Bagan Ground in Kolkata, West Bengal on Sunday

TRAU’s new signing took 9 seconds to give them the lead after his venomous curling effort from outside of the box found the back of the net, leaving the opposition in utter disbelief. The sheer suddenness of the goal left Real Kashmir FC in disarray as TRAU dominated the opening exchanges, trying to extend their lead. Real Kashmir fought back and in the 22nd minute, Mason Robertson’s effort from a freekick came close to grabbing the equalizer.

Since then, it was TRAU dominating possession while the Snow Leopards having the lion’s share of goal scoring chances. In the 25th minute, Dipanda Dicka tried to find the back of the net after his swift effort inside the box was saved.

Perhaps the best opportunity for the Snow Leopards to equalize the match fell to Lukman Adefemi in the 37th minute when he missed a free-header inside the box with only the opposition custodian to beat. The Snow Leopards played a counter-attacking brand of football and nearly found the net in the 41st minute when a cross from the left flank, after a quick one-two, was heaped wide of goal.

Despite TRAU’s possession, chances came short and rare for the club from Manipur. Unable to extend their lead, they lead by one goal to nil at the halfway point of the match.

TRAU were handed a golden opportunity to double their lead in the 58th minute when Komron was put onto goal by a swift counter-attack. After turning his marking man inside out, Komron could only test the keeper into making an easy save, as the Snow Leopards survived.

Sitting deep and hitting on the counter-attack, letting their opponents enjoy possession and dictate the tempo of the match, TRAU committed bodies into defence in an attempt of holding on to their lead.

In the 70th minute, Mason Robertson found the equalizer for Real Kashmir after his thumping header off a Ralte freekick found the back of the net. The equalizer spurred the Snow Leopards as they searched to take the lead but to no avail.

Despite dominating the latter half of the match and even finding the equalizer, Real Kashmir ran out of steam searching for the decisive goal that would have given them the win. TRAU’s defence held on for the remainder of the match as both teams shared the spoils of battle at full-time.

In their next match, Real Kashmir FC will take on Chennai City FC and TRAU will cross swords with cross-city rivals NEROCA FC on January 15, 2021.